Ninne Pelladatha Weekly Update: Brahmini Tells Mrudula To Get Out Of The House

Finally, it seems that the shy and coy Mrudula is about to unleash the badass side to her. Here's what happened before she decided to do that. 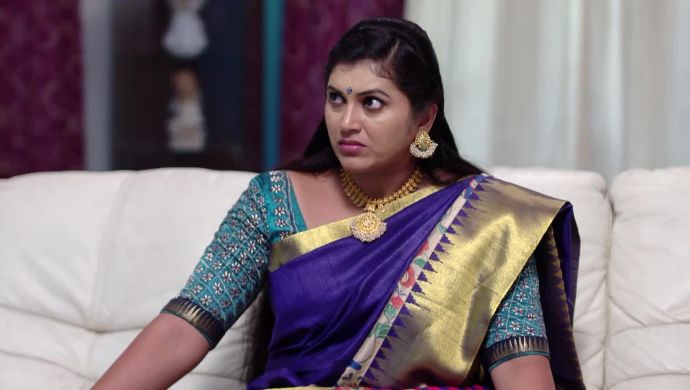 Mrudula (played by Madhubala) and her tough life in the Telugu TV show Ninne Pelladatha are no secret to us. She has, quite literally, fought with death and has come back alive. Yet her hardships seem to have no end. But now, after all these days and after being hated and demeaned beyond all bounds, Mrudula seems to be ready to unleash the other side of her. So far, we have only seen her as the shy girl who would do what anyone would tell her to do without any questioning. She bore the brunt of the misdeeds of others and never complained. Before we see what she has in store for us, check out what led to this decision, in the week that started June 10, 2019. You can watch the week in short here:

It all started as Mrudula excitedly woke up her husband, Madhu, to get dressed for the pooja that she has been waiting for long to complete.

While Madhu was getting ready, Mrudula was handling other chores when she was interrupted by her sister Mansi (played by Sree Priya). She told Mrudula to stop acting and said that if she really cared for Mansi, she shouldn’t be doing the pooja.

Mrudula agreed to Mansi’s conditions and told Bharati and Madhu that the plan was to make Mansi a part of the pooja instead of her. That shocked everyone, but no one questioned her decision.

But it all did not go well with her brother Tarun. He directly blamed Sarayu (played by Sarayu Roy) and Mansi for her sudden change in the decision. As he was about to slap Mansi, Mrudula stopped him.

Mansi continued the pooja and Sarayu is happy that she successfully stopped Madhu and Mrudula from doing the pooja. She is confident that her next step will break them entirely.

Later, Mansi’s would-be husband comes home and shows her the saree and rings for their engagement. Mansi acts cold and doesn’t respond to him.

Bharati asks Mansi to bring coffee for him. She plans on mixing salt in it but is stopped by Sarayu, who tells her to be sweet and take things in her control instead of being outrageous.

Tanaya sees Brahmini suffering from chest pain. She panics and calls Madhu to come home at the earliest. Madhu and Mrudula arrive. But Brahmini tells her to get out and leave Madhu behind.

The next day at the Kamineni house, Mrudula leaves the glass of milk meant for her unattended to see to something else. Sarayu takes this opportunity to mix spoons full of chilli powder in the milk.

Mrudula sees this and makes sure that Sarayu drinks the milk in which she mixed chilli powder. Sarayu sees Mrudula and tries to threaten her like she is used to doing. But Mrudula gives her a sassy response and walks off.

That’s just the tip of the iceberg. We know there is a lot more coming up soon. If you want to know what it is, stay tuned to this space. Until then, watch the latest episodes of Muddha Mandaram on ZEE5.

Regional, Thriller, Exciting, Unexpected And Totally Worth Your Time. That's ZEE5 Original Kailasapuram For You

We Love How Our Favourite Celebs Wished Their Nannas