Previously in Ninne Pelladatha, Mrudula revealed her identity and Brahmini gave her a week's time to make a place for her. Read the weekly update here 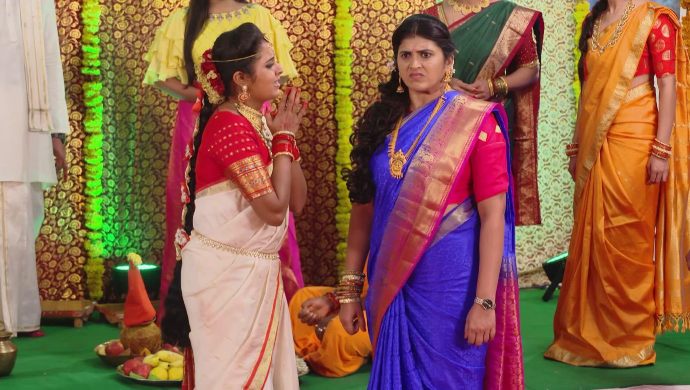 Previously in the ZEE Telugu TV show Ninne Pelladatha, Madhu sees Mrudula on the way and they end up fighting. Brahmini meets with an accident and Mrudula rushes to the hospital to meet her. But Mansi scolds and taunts her, even Madhu asks her to leave. Mrudula changes as Sampangi and comes to the hospital again. While everyone is looking for a blood donor, Sampangi comes ahead as a suitable match. The wedding preparations of Sampangi and Raghu go on in full swing and Mrudula finally unmasks her disguise.

Mansi and Prajwala try to fuel the situation and Brahmini’s anger. But Brahmini decides to give her one week to do whatever she wants to do. Brahmini affirms her belief in Madhu that he will not let her stay.

Gaurav asks Madhu and Mrudula to stand at the door and goes to bring the Aarti plate. He performs a small aarti and tells Mrudula to place her first step inside the house, strong enough to shake them up.

Brahmini stops Mrudula and tells her to keep her stuff packed. Because this time when she leaves the house, there will be no turning back for her. Mrudula, too, tells her that this time things will change for better.

Komali throws Mrudula’s photo on the floor and starts cussing her. Arjun and Bharati come to see what was wrong, Prajwala joins too. She tells that Mrudula’s memories should be gone forever and burns the photo.

Bharati sees this and slaps Prajwala. She asks her what does she knows of Mrudula and how dare she try to interfere in their matters. Neither Prajwala nor Komali have any response to this.

Mrudula tries to convince Mansi for an important pooja. But Mansi first yells at Mrudula and then scolds Gaurav and Madhu for supporting Mrudula. She also calls her mother and asks her to stay away.

The next day, Mansi and Madhu head to office and Gaurav joins them. He informs Madhu that he has been selected just one night before and is joining the same company today onwards.

Once they reach office, Gaurav sends the couple in the lift and he goes to the liftman and says, “Pokiri cinema, lift scene”. The liftman does as instructed and makes a mess in the lift’s movement. This brings Madhu and Mrudula closer to each other, physically.

Later at night, Mrudula burns her hand while she tries to save Mansi’s saree. Madhu helps her with some ointment. Mrudula tells herself that getting some sort of a bruise every day would be great. And Madhu tells her to stay away, indirectly.

Read more about this show here. For more drama, watch the latest episodes of Kalyana Vaibhogam on ZEE5.