In the previous week, while everyone demeans Veeraswamy, Sampangi takes him out and reveals her identity to him. Read the full update here. 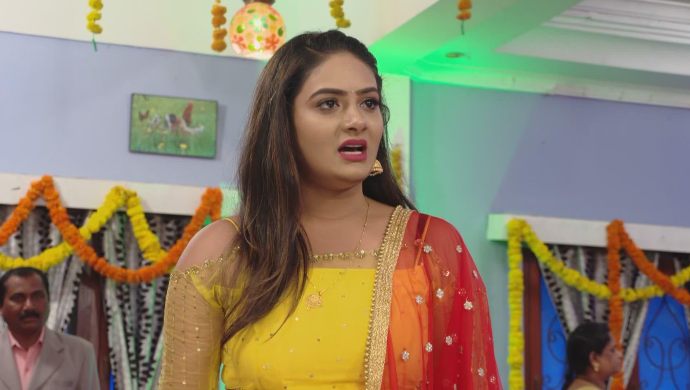 Previously in the Telugu TV show, Ninne Pelladatha, Arjun and Bharati lament about the condition of their lives. They miss Mrudula (played by Madhubala) but have no idea how to find her. Meanwhile, Sampangi keeps getting closer to Brahmini. She helps them with everything, including helping Gaurav get closer to his wife, Mansi (played by Sree Priya). Mrudula dreams that Mansi has found out about her disguise and gets her out of the house. But in reality, she was close to the people who she wanted to be close to. Sarayu (played by Sarayu Roy) sees Sampangi in Brahmini’s house and ends up fighting with her. She even plans to kill her by hiring a sharp-shooter.

On the day of Tarun-Tanaya and Gaurav-Mansi’s reception, Veeraswamy comes to Brahmini’s house. He starts asking everyone about his daughter in spite of knowing that they would not have answers.

Brahmini and Mansi scold and yell at Veeraswamy, but when he crosses the line, Tarun steps in to show Veeraswamy his place. Tarun slaps Veeraswamy and asks him to get out of the house.

Madhu (played by Abhi Prathap) and Sampangi are unable to watch the horrors and offer to escort him out of the house. Madhu goes back inside but Sampangi stays out. She calls Veeraswamy as ‘Nanna’ and tells him that she is Mrudula herself.

Everyone tells Madhu to lighten up the atmosphere and sing a song for the couples. Madhu sings the popular song Allantha Doorala from Aadavari Matalaku Arthale Verule. Later, he even suggests a few games for them to play.

As Madhu sings the song, Sampangi forgets her reality and imagines herself in her real avatar and dances around Madhu. Like the newlyweds, she too has a reception function in her imagination.

Amidst their celebration, Komali and Prajwala walk inside Brahmini’s house. They accuse Brahmini of being a hopeless mother. Komali tells them that they have been too busy in their own celebrations to bother about what’s happening to the people around them.

Prajwala tells them that Sarayu is almost dead. Then she moves on to talk about how Mrudula snatched her happiness. She also tells that everyone has given Sampangi a superior spot than Sarayu and it hurts to know that.

After Komali and Prajwala leave, Brahmini consoles Sampangi and tells her that she does not need to take their words to heart. She asks her to let go of everything and start a new life by marrying a suitable boy.

The next day, Prajwala sees that Sampangi is waiting for an autorickshaw. So she waits and sees where Sampangi was headed. When Sampangi asks for “Road No. 45”, she decides to follow her because Mrudula’s assistant has been kept hostage there.

Sampangi goes to untie her assistant, Priya, but she fails to notice Prajwala and Sarayu’s friend watching her from inside her car. They find out that Sampangi is none other than Mrudula herself. Prajwala decides to use this to her benefit and torture Mrudula.

The next day, Bharati tells Sampangi to get ready and agree to the wedding because she wouldn’t want to face the same fate as Mrudula, who could never win Brahmini’s love and affection.

Check out what happens next here. Read more about this show here. For more drama, watch the latest episodes of Kalyana Vaibhogam on ZEE5.