Now that Prajwala has taken the baton from Sarayu, to complete her revenge, she is happy to find new means to trouble Sampangi aka Mrudula. 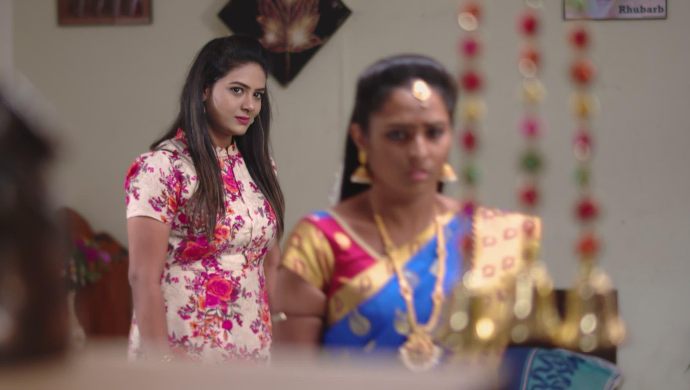 Are you missing Sarayu in the ZEE Telugu show Ninne Pelladatha? Well, you do not have to. Maybe not Sarayu but her cousin from the US, Prajwala, has taken over the baton. As Sarayu lays on the hospital bed battling between life and death, Prajwala finds ways to fill in her space. In an attempt to hurt Mrudula, Sarayu stumbled into Sampangi. And in order to get rid of Sampangi, Sarayu fell prey to a sharpshooter’s target. The end result? Change in the play, not the game.

For starters, Prajwala held Mrudula’s assistant hostage in order to get some details out of her. And Mrudula, being the naive person that she is, walked out as Sampangi to save her assistant. She managed to save her but in the midst of it, Sampangi got trapped. Now, Prajwala got more than what she had asked for. Mrudula is Sampangi and Sampangi is close to Madhu and Brahmini – as opposed to her promise to Mansi. So… we need not tell you, particularly that the game has just begun. But now that we’re at it, Prajwala’s game is out in the open.

Prajwala does not believe in taking small  steps to torture her target. She has been dropping statements that lead Mrudula to understand that her cover-up has been  exposed. The fear in Mrudula’s eyes excites Prajwala and boosts her motives. Prajwala has also been using Mrudula’s secret elsewhere to let people know that there is something more fishy about Sampangi than they see coming. More importantly, she has been using the names ‘Mrudula’ and ‘Sampangi’ extremely smartly.

It’s only a matter of time until Prajwala sets her game out to everyone to watch as Mrudula weeps in humiliation. Stay tuned to find out what happens next. More episode and interesting stories about Ninne Pelladatha await you. For more, tune into Kalyana Vaibhogam on ZEE5.