Ninne Pelladatha: Prajwala Steps Into Sarayu’s Shoes And Sketches A Plan With Komali

In the latest episode, Prajwala takes over Sarayu's duty and has a brand new plan to take revenge from people along with Komali. Read more here. 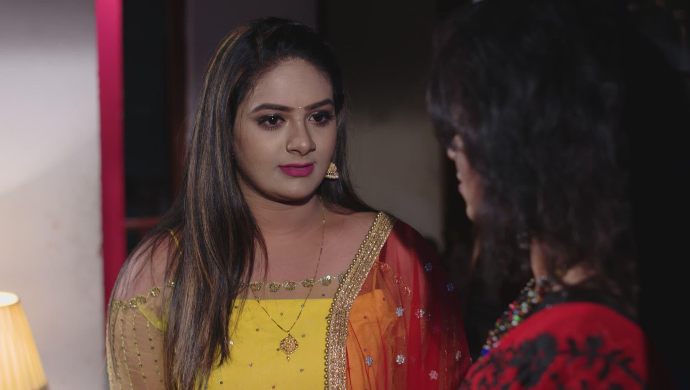 In the Kovalmudi and Kamineni family, of the Telugu TV show Ninne Pelladatha, the tides are high and scary. With Mrudula (played by Madhubala) leaving the house, Arjun and Bharati have lost everything that they ever called their own. Gaurav has still not been able to make his wife, Mansi (played by Sree Priya), his own. Brahmini is at peace but not entirely, because Madhu (played by Abhi Prathap) is pretending to be happy without Mrudula. Sarayu (played by Sarayu Roy) got what she wanted — breaking the happy family into fragments and snatching away their happiness.

Despite achieving what she wants, Sarayu is not able to celebrate her victory. That is because her own misdeeds have landed her in a hospital room — battling for life. We thought finally things will change for the better and the broken family will come together again. But we were wrong and how! Sarayu may be unavailable, but her presence is always felt. This time, it goes by the name of Prajwala (played by Sunanda Mala Setty) and happens to be Sarayu’s cousin.

If you, like us, have been wondering what this American-bred girl could do the family here? Well, you, like us, will have to wait until the moment comes. Because she seems to be carrying the same wrath and rage as Sarayu. However, unlike Sarayu, Prajwala is keeping all of her moves secret until the last moment. Recently, after slandering Brahmini for her ignorance and lack of hospitality, she came back with more anger. Now, Prajwala plans on doing something to the Kamineni property that would help Sarayu.

But what is her move or plan? We do not know. Going by Komali’s wide and wicked smile it seems that the plan will further demolish the members of the Kamineni family.

Let us know what your thoughts are. Stay tuned for the latest episodes and more interesting stories on Ninne Pelladatha. Check out Muddha Mandaram on ZEE5.