Brahmini donating blood to Mrudula made us believe that the world was finally alright. But after Sarayu's misdeed, things have gone for a toss again. 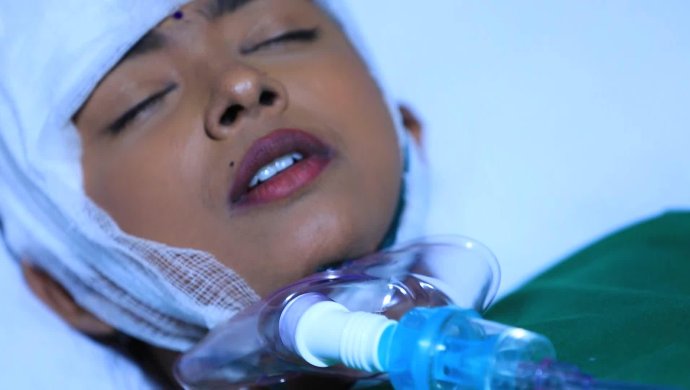 In the last episode of the Telugu TV show Ninne Pelladatha, we saw that Mrudula had been admitted to the hospital by her brother Tarun, Madhu and Mrudula’s parents. Mansi had tagged along, but only to stand in a corner. The doctors declared that Mrudula will be in a coma if she did not get O negative blood in time. After begging and crying, Madhu’s mother Brahmini agreed to donate blood for Mrudula. In the end, we saw that Sarayu entered Mrudula’s room disguised as a nurse and removed her BiPAP ventilator. Here’s a snippet of what happens in the next episode:

However, in the spoiler, we see that after Sarayu removes Mrudula’s BiPAP, she breathes heavily and finally her heartbeat falls to flat line in the electrocardiogram monitor. Sarayu leaves poor Mrudula to die, but the doctor in charge of her treatment sees this and puts the BiPAP back on her. But will that be enough to save her? Will Mrudula be able to survive?

In the episode aired on May 7, 2019, the doctor had also revealed that Mrudula was pregnant. Previously, Brahmini, who had insulted Mrudula in front of Madhu and said that she would be happy if Mrudula died, had come to the hospital and calmly donated her blood. Will this move change the current heated mother-in-law and daughter-in-law relationship to something better? We are definitely rooting for that. Brahmini hated Mrudula because she belonged to a poor family and was adopted. But now, Mrudula also shares the Kamineni blood, literally.

When Sarayu was in the room with Mrudula, everyone else was pacing back and forth in the hospital corridor. Suddenly, Madhu collapsed to his knees and had an emotional breakdown. This scene takes you back to the argument between him and his mother where he had said that if Mrudula dies, he would be dead moments before her. For all the Madhu-Mrudula fans, this was enough to prove how strong their love is.

Until next time, catch up on the fun and the new love story of Vamsi and Vasundhara in Maate Mantramu on ZEE5.

Watch The Spooky Tale Of Dia In Kanam Ft. Sai Pallavi On ZEE5