Mrudula's worst nightmare ever and Mansi's craziest obsession are now about to come closer to each other than ever before. Read to know how. 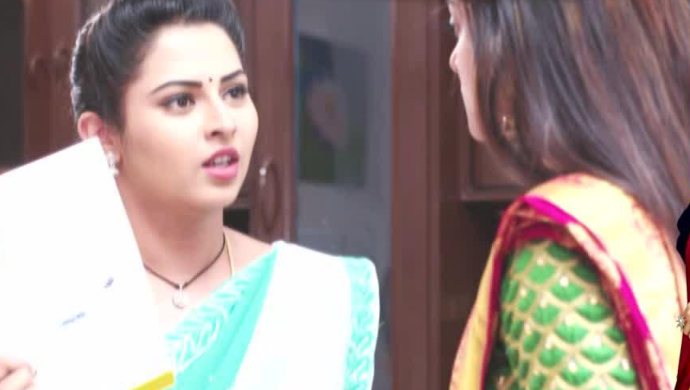 Dreamy good days for Mansi (played by Sree Priya) or terrible nightmare coming to life for Mrudula (played by Madhubala)? What’s about to happen in the Telugu TV show Ninne Pelladatha?  Mrudula is trying her best to mend her relationship with her mother-in-law, Brahmini. She is also trying to make up to her sister, Mansi and at the same time, juggling with her new responsibilities as a CEO. We are really rooting for her to find success in each of her dreams. But as of right now, everything seems to be a distant dream.

In the preview for the episode airing on July 3, we see that Mrudula is sitting close to the entrance to Mansi’s room. Mansi is all decked up in a new saree and jewellery, sitting on her bed. She first takes a look at her wedding card and then takes a pen to start scribbling off the groom’s name. Once that is done, she starts writing Madhu’s name on the wedding card. Mansi’s longest obsession has been becoming Madhu’s wife, and by adding his name on the wedding card, she tries to make herself believe that she is indeed preparing to marry Madhu. But Mrudula steps in just in time and questions her behaviour.

Mrudula asks Mansi about her intentions behind writing Madhu’s name. Mansi tells her that ‘it’s what is about to happen’. Mrudula is taken aback to know of Mansi’s hidden intentions and her guts. Next, we see Brahmini sitting on her sofa. We all have known for long now that Brahmini has something brewing in her mind to stop the wedding and make sure that Madhu marries Mansi on the same date and time. But her exact plan is unknown to us. We wonder what’s cooking inside Brahmini’s evil head. Will she succeed in keeping her word to Mansi? Will Mansi trust Brahmini and go through the wedding rituals happily? Stay tuned for more updates.

For more entertainment, check out Maate Mantramu on ZEE5.

Have You Seen The Landmark Hit Film, Jersey Starring Nani And Shraddha Srinath Yet? Watch On ZEE5 Now

In Kalyana Vaibhogam, Manga Prepares To Deal With New Troubles. Here's How!