In the upcoming episode, Mansi sees Mrudula getting ready as Sampangi but finds out the truth instead. Read more about it here. 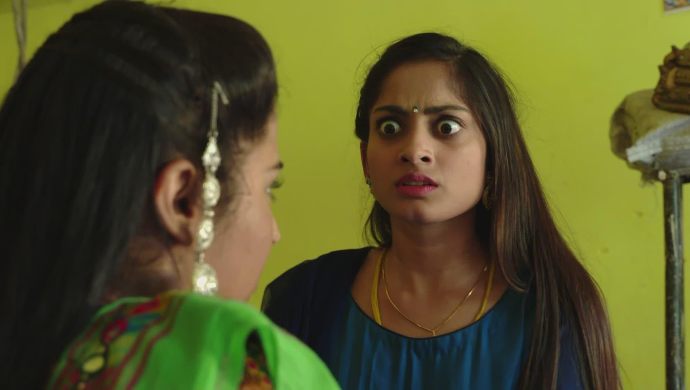 Everyone blamed Mrudula (played by Madhubala) for all that had ever gone wrong, in the Telugu TV show Ninne Pelladatha. She was humiliated, slapped and hurt, and even kicked out of the house. But call it the universe’s design or her fate, she keeps coming back to the same people again. However, this time she did not come back as Mrudula. A few situations turned her into a village girl and she embraced the identity of Sampangi. This came as a blessing in disguise to Mrudula. Love, affection and compliments were the only things that came her way.

Take look at the snippet from the upcoming episode here:

In the preview for the episode airing on August 23, 2019, Mrudula starts her day by getting ready as Sampangi. But to her misfortune, she drops one of her earrings outside the storeroom where she was applying a darker shade of make-up to conceal her identity. However, it all goes wrong when Mansi (played by Sree Priya) walks in the aisle and finds the earring lying on the floor. She first wonders why Sampangi would drop it like that but does not pay much heed to it. Moments later, she picks it up and thinks why would she be around the storeroom and opens the door to check.

Mansi goes closer to her and asks what she was doing there. When she receives no answer, Mansi forcefully turns her around and is shocked beyond her wits. The rage kicks in instantly and Mansi accuses Mrudula of being a cheat and threatens to expose her truth. Mrudula apologises and tries to explain but Mansi does not give her a chance. Mrudula tries to beg and plead her to not tell them anything. But Mansi wouldn’t listen to her.

Now that Mansi knows, everyone will know it soon. How will they take it? Will Brahmini let Mrudula stay or kick her out again? Let us know in the comments below. Check out Attarintlo Akka Chellellu for some light-hearted drama on ZEE5.