In today's episode, Sarayu tells Brahmini the truth about the new investors of her firm. Read how it goes. 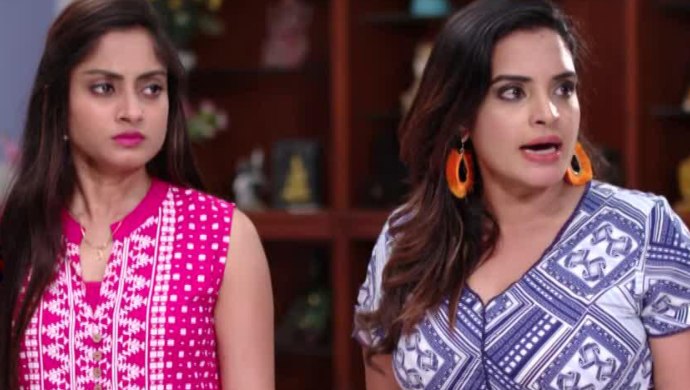 The last few days have been tough for Brahmini professionally, in the Telugu show Ninne Pelladatha. Soon after Mrudula (played by Madhubala) was selected as the CEO of a firm, Brahmini withdrew all of her contracts and agreements with that firm. This left her in major trouble and reduced the value of her company. Despite Mrudula and Madhu (played by Abhi Prathap) trying their best to keep Brahmini’s association with the company intact, she left. Mrudula saved the day for Brahmini and her company by using her contacts and asking one of them to invest in her company, immediately.

In the preview for the episode airing on July 10, we see that Brahmini questions Mansi (played by Sree Priya) about the investors’ e-mails bouncing back to her. Mansi tries to make something up but is unable to lie. She hesitates to come up with reasons and that’s when her sidekick, a.k.a. best friend, Sarayu (played by Sarayu Roy) steps in for her. Sarayu, in all her rage, starts yelling and spills the truth that had been a secret all along. Sarayu tells Brahmini to ask the same questions to Mrudula. Brahmini is puzzled to hear this and asks Sarayu politely why she would ask Mrudula when the investor was brought into the picture by Mansi. Sarayu tells Brahmini that the investors had never come because of Mansi. She adds further that Mrudula was the person of contact all along and it was her contact who had agreed to invest in the company at its lowest.

Standing next to Madhu, Mrudula finds herself in a fix. She tries to say something but Brahmini shuts her up with her scary and wide-eyed glare. Will Brahmini listen to what Mrudula has to offer? Will she accept the help? We’re sure it’s not time yet for Brahmini to understand the wider picture and accept help from her own daughter-in-law. Let us know what you think, below. Watch the full episode.

Guess Which Of Your Favourite Stars Just Made His Instagram Debut?