Posing pretty is passe. How about you get inspired by the actor and pose crazy instead and make life a lot more fun? 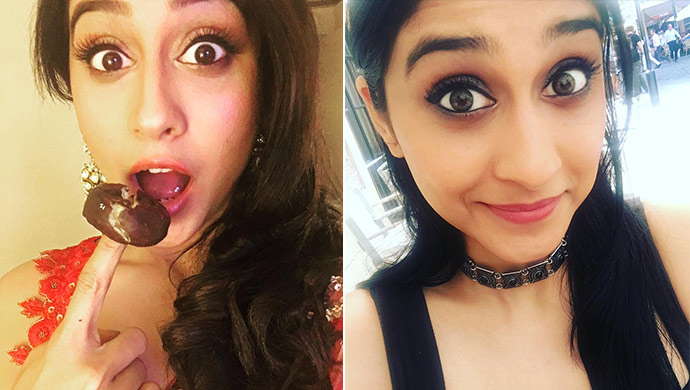 You surely remember her as Jamuna in the superhit Telugu film Nakshatram, starring Sai Dharam Tej, Regina Cassandra, Pragya Jaiswal and Prakash Raj in the lead roles. Regina, who plays one of the lead characters, has a role that is fun and creative and the quirkiness of her characters enlivens this 2017 Telugu movie. She is the mardal of Sundeep’s character Rama Rao and together, they make a pair we can identify with. But it’s not just drama and antics in reel life for the Soukyam actor, Regina loves to keep it light and playful in real life too. One glance through her social media handles will tell you how much she loves keeping the environment around her fun and jolly.

And what’s life if you don’t have too much fun? Don’t you think so too? Think of all those times you flip your phone out to click a selfie, and end up with multiple selfies in various poses instead? Or the times when you go out with your gang and fill up your phone’s memory card with multiple photos of crazy poses? Well, Regina is just like us and then some. She loves fun and drama just as much as we do. Don’t believe us? Check out these photos and videos for proof.

Look at those expressions! She sure owns them. How many times have you tried out similar crazy ones when posing for a photo? Way too many times, right?

Watch her belt out acting tips in this series of Boomerangs. Those facial expressions? Isn’t your phone’s memory card just so full of them?

What’s life without a little drama? The pretty actor shows us how to merge poses and drama together and not go over the top.

And that’s how she beats Monday blues. With some ‘madness’. Maybe we should try doing the same to bid Monday blues goodbye?

Kick started (a lil too literally?! 😅) promotions for #MrChandramouli… oh boy! you are gonna see a loooot of us on the very many #Tamil channels. 😛 #MrChandramouliJuly6th Jumpsuit – @ShahinMannan at @TypeChennai Photography – @kiransaphotography Styling – @DivyaNiranjan_ & @NavyaNiranjan_NN

Why pose pretty when you can do karate chops? The Nakshatram actor knows only too well that if you don’t fight for it, you don’t get it. Quite some life goal in one pose.

Want to check out more of her movies? You can watch them here on ZEE5.

Jersey Jukebox: 6 Songs That Will Uplift Your Spirit Every Time You Listen To Them