‘My Ambition Is To Be Half As Good As My Father’, Says Allu Arjun As He Breaks Down

For the first time in all the years, Tollywood superstar Allu Arjun opened up about his emotions and expressed his feelings, openly! 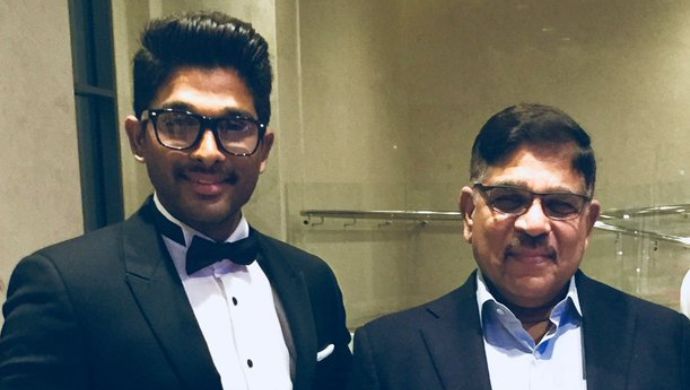 With the success of Naa Peru Surya, Naa Illu India in May 2018, Allu Arjun seemed to have disappeared from the big screens. Now, a year and a half later, the actor returns with his latest release. Ala Vaikunthapuramlo is his third film with director Trivikram Srinivas and second film with co-actor Pooja Hegde. The film has already received much appreciation from the audiences with its interesting music and teaser. The mega-trailer launch saw a new and more vulnerable side of the superstar, who shared his deepest emotions with his fans.

The actor spoke about how the Allu’s, like most us, are not the ones to express their emotions. It’s all built up, and he thought of the event to be a good opportunity to share his feelings. He said, “My father is the first one to launch me. Out of my 20 films, 7-8 have been produced by him. Not at any event or at home… I’ve never said it but I have to say it now… Thank you, daddy” as he started being teary-eyed. “I understood one thing when I had my son (Ayaan), and that is, I’ll never be as great as he (his father) is. Even if I turn out to be half as good as he is, in my entire life, I’ll be a winner.”

Recalling his earlier days, he said, “I earned about Rs. 1 Cr through my first film. Thankfully, I have never had issues with money, ever. But when I was meeting my wife, I asked her only one thing. I said, I have all the money I need and yet, I want to continue to live with my father,” he proudly exclaimed, “That’s how much I love my father.” Further, he added, “My father is the most misunderstood person. People have called him out for things, they have accused him of ‘taking’ away money from others. But my father isn’t like that.”

Allu Arjun had a good laugh as he joked about the rumours around his father’s reputation and said, “he has a reputation for being crooked. Only when you talk to him, you will understand that he is as sweet as one can be.” The actor also urged either the “Telangana Government or the Andhra Pradesh Government” to felicitate his father with a Padma Shri Award, just like his grandfather, Allu Ramalingam garu.

1500 Episodes And 5 Years! One Last Goodbye To The Ghattammaneni Family Of…

Birthday Special: 8 Songs By The Legendary Musician AR Rahman That Are Timeless…

Best of 2019: 6 Tollywood Actors Who Made A Mark With Their Electrifying…

Lastly, before winding up for the night, the actor spoke about and to his fans, to his support system. He said, “I have been at home, jobless, for over 500 days. But it’s because of two reasons that I never felt like I was ‘away’ or ‘far’. First, it’s my fans. And second, it’s my kids. No matter what the situation is, you always made me feel like I was right here. Other stars may have fans. But I have an army!”

Allu Arjun will be seen in Trivikram’s Ala Vaikunthapuramlo on January 12, 2020. In the meantime, you can check out his hit films like Duvvada Jaggantham on ZEE5.

Samantha Akkineni Reveals The Much-Teased About Secret Tattoo! And This Is What It Is!