Previously, in Muddha Mandaram, Soundarya is all set to find the truth behind Neelambari's plan and Abhi's truth. Read the weekly update here 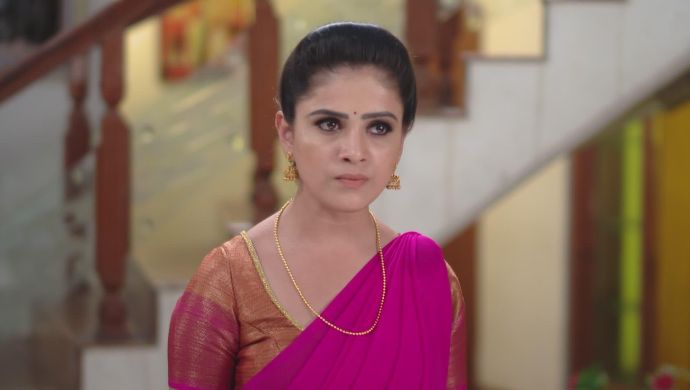 Earlier in the Zee Telugu show Muddha Mandaram, Krish cross-questions Bhavani and Chaitra when they try to manipulate him and make him hate Soundarya. Later, the two ladies join Gani and Sarsu to make things tougher for Soundarya while she was selecting clothes. But Soundarya gives them a crisp reply. After being shown their place, Bhavani creates a situation due to which Soundarya comes finding for them and burns the saree that Akhila gives her. But when the time came, Soundarya dressed in Parvathi’s saree and impressed everyone.

Soundarya goes to meet Abhi in the orphanage. He is impressed to see her in a new avatar. Soundarya tells him that no one wants to separate them anymore. Abhi is puzzled to learn about this and does not react as she expects.

Soundarya asks what was wrong with him and why he hates this great family. Abhi tells her about the time when he chased Akhilandeswari’s car to ask for money to save his friend. But she ignored all his cries and zoomed away.

Soundarya leaves from there thinking of finding the truth behind it. Abhi rushes down to the warden of the orphanage and asks him about the truth of his being. He looks at Deva and Parvathi’s picture and asks who brought him there and how!

The warden tells him that someone came and dropped him one night in the orphanage. Before Abhi could ask who the person was, Neelambari and Bheekshapati, her assistant, enter.

Neelambari asks Bheekshapati to tell Abhi about the night that he came to the orphanage. He talks about the lady who dropped him in his hands and passed away. When Abhi asks if the lady was Parvathi, he denies it.

That night, Krish hears the telephone ring and Akhilandeswari tells him that the caller must be a smart person. When the phone rings for the second time, Akhilandeswari answer and is shocked to hear Neelambari’s voice.

The next day, as discussed previously, Neelambari lands inside the Ghattammaneni house and tries to create the illusion of a changed woman who wants to earn a name for herself. But no one believes her act.

Neelambari tells them that she will bring Abhi back inside the house and make them believe that she has truly changed as a person. Soundarya tries to sweet-talk with her but Akhilandeswari is unable to bear it.

Once Neelambari leaves, Aishwarya, Krish, Akhila and her husband discuss the possibilities of Neelambari’s visit and connection to Abhi. Soundarya suggests a plan and everyone agrees to follow it.

Akhila tells Krish to run a broadcast and print ad. The ad must carry the news that the person who brings Deva’s son to the Ghattammaneni house will be rewarded with half of their wealth.

In the flashback, we see that Neelambari commands Bheekshapati to bury the person who heard them talk about Deva and Parvathi. Beekshapati does as mentioned but keeps the person’s phone with him, as a backup for himself.

Bhavani and Neelambari meet separately and discuss how they want to proceed together. Bhavani tells Neelambari that while she has successfully made Abhi stay away from his family, she has made him hate Akhila too by sending him without money for his friend.