Last week, Soundarya came back to the Ghattammaneni house after Bhavani and Chaitra secretly kicked her out. Read the full weekly update here 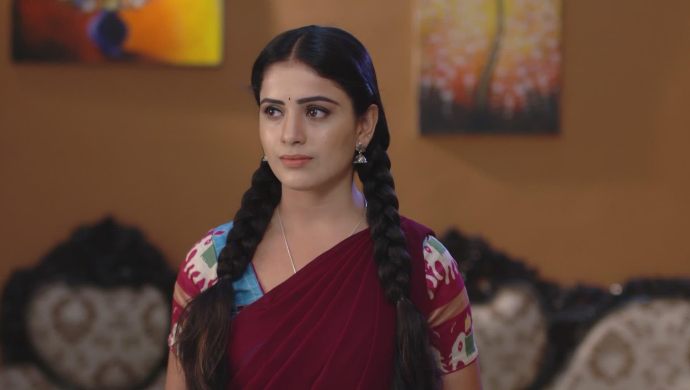 Previously in the long-running hit Telugu TV show Muddha Mandaram, Bhavani and Chaitra trick Soundarya by calling her from a new sim card and changing the voice to Abhi’s. They kidnap her on the way and everyone else has no clue about her whereabouts. Abhi and Surya prepare for their money heist. They dress up as mechanics and take laughing gas along with them. They shoot the gas into the air conditioning system and all the workers end up laughing. They take away the money but are caught by a cop, who was set up by Bhavani. Akhilandeswari comes just in time and saves them. Surya escapes but Abhi waits for Akhilandeswari. He tells her that he can never come as her heir because she killed his best friend.

Everyone in the house is surprised to see Akhilandeswari’s husband. But they are unable to express it since Soundarya is missing. He walks in and asks them to not worry because he found Soundarya on the way and brought her home again.

Bhavani and Chaitra, who had originally planned the kidnapping of Soundarya, were surprised to her see in the house again. After some sulking, they conclude that it must be Abhi’s doing once again.

Soundarya makes her way home but is ignored constantly by her parents. She tries to explain what had happened to her. But neither Gani nor Sarsu would pay any heed to her. In fact, Sarsu tells Gani to ask Soundarya to get out of her sight.

After lecturing her over the same things again, Gani takes Soundarya’s hand and makes her swear that she will deny her feelings for Abhi to Akhilandeswari, upfront, and marry Krish – as they had originally planned.

Chaitra and Bhavani burn their feet while doing yet another stupid activity to hurt Soundarya. They make their way to the living room but are ridiculed by Krish and Aishwarya.

The next day, Soundarya mops the floor and Bhavani purposely drops muddy water. Soundarya then demands that Chaitra clean the floor for their collective misdeed. It ends up in slander and Soundarya ends up slapping Bhavani, by mistakenly.

Chaitra provokes Bhavani to slap her back but she resists and walks away. Aishwarya tries to explain it to everyone that Soundarya mustn’t have any such intentions. She then also tells Soundarya to be a little careful in the house.

While Soundarya, Gani and Sarsu are in the kitchen doing the chores with the househelp Vijay, Bhavani and Chaitra walk in to disturb them. But originally, Bhavani wanted to change the glass of juice with a spicy one. So that Soundarya ends up hurting Aishwarya.

Akhila, her husband and Chandra Shekar go to meet Abhi. They are greeted by Surya but when Abhi walks in, he asks them to leave immediately. Because he does not want to be associated with them.

POLL: Will Mrudula Make A Confession Or Will Gaurav Save The Day In Ninne Pelladatha?