She is still unable to track Gani down. Abhi and Soundarya continue their fight to participate in the college play. Here's a quick recap of the week. 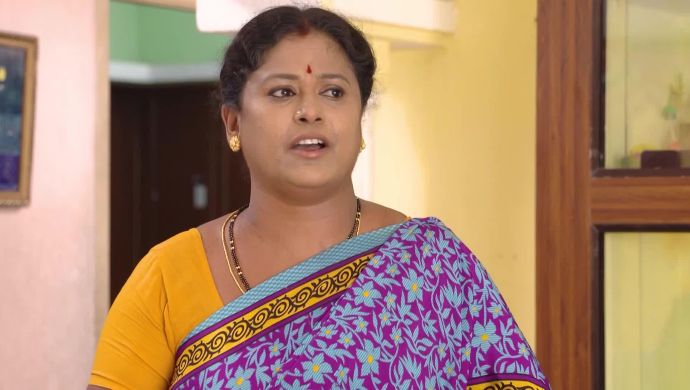 The Telugu TV show Muddha Mandaram, has seen an extremely eventful week in the week starting June 10, 2019. From Sarsu learning the truth about Parvathi (played by Thanuja Gowda) to Akhilandeswari’s (played by Hairtha) lost hope and more. Check out all that happened in the last week in this Telugu serial, in short:

The week starts with Akhilandeswari and Chandra Shekhar knocking on Gani’s door to inquire about them. Gani tells Sarsu to hide their identity at all costs. He assures to reveal the truth later but asks her to save the day.

While he hides in the room, he remembers the pandit‘s fortune telling. He had alleged that his daughter, the reincarnation of his late sister, will fall for the rightful heir of the Ghattammaneni family and die in the same way.

After finding no answers from Sarsu, Akhilandeswari and Chandra Shekhar ask her to inform them about Gani and his family if she comes across them. Sad and heartbroken, the two leave.

In college, Chaitra’s friend informs her about Soundarya’s success in convincing Abhi for the play Varundhini Pravarakhya play. This makes Chaitra furious and she plans to bring Soundarya down again.

In the Ghattammaneni house, Bhavani was celebrating Akhilandeswari’s failure in bringing Gani home. Later, due to her own hyperactive self, Akhilandeswari yells at Bhavani and tells her to stay within her limits, and not interfere in everything.

Soundarya comes to know about the plan of moving to another house and asks her parents to tell the truth behind this decision. She assures Gani and Sarsu that she will solve the water problem if they give her Rs 10,000.

Abhi calls Akhilandeswari once again and challenges her. She tells him that she doesn’t need to entertain him as he is neither her son nor her grandson. She tells Chandra Sekhar to keep a tab of every penny from now on.

The next morning, Soundarya joins her father for breakfast but looks extremely upset. She tells Gani that the pattucheera that Sarsu lent her doesn’t match with anything and asks for money.

When Gani gives her Rs. 500, she storms off saying she doesn’t need chillar. Sarsu comes out from the kitchen to give her an earful. Gani tells Sarsu that because of her she didn’t complete her breakfast, but Sarsu shows him the clean plate.

Wondering what happens next? Stay tuned here to know more. Until then, watch the latest episodes of Attarintlo Akka Chellellu on ZEE5.

Ninne Pelladatha Weekly Update: Brahmini Tells Mrudula To Get Out Of The House