Last week in Muddha Mandaram, Bhikshapati meets Abhi & tells him everything that he should know about his parents. Read the full weekly update here 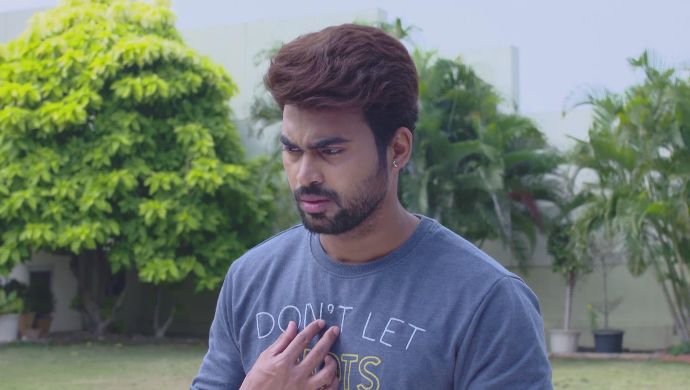 In the week before the last in Muddha Mandaram, Abhi calls Soundarya, incessantly, while she is with Akhilandeswari. Chaitra takes this opportunity to her advantage and pressurises Soundarya to answer the call. Finally, Soundarya gives in to the pressure and Abhi speaks like a salesman. The next day, Abhi and Soundarya meet in a part, where they are attacked by a couple of local goons. A few others capture this on their phone and decide to share it online to earn money. The video eventually makes its way to news channels and Soundarya tries to hide the news from her family. Bhavani finds it out and uses this as an excuse to treat Soundarya like her slave. Soundarya asks Abhi to help and he sends a link to Bhavani’s phone which wipes out the data. Once that’s done, Soundarya gives Bhavani a crisp answer.

Everyone is in Akhilandeswari’s room, beating someone hiding underneath a blanket. The person runs further towards the wall and removes the blanket. Turns out, it was Bhavani, who claims to have entered Akhila’s room to take some sleeping tablets.

Bhavani goes back to her room and thinks that Neelambari will be unhappy when she gets to know what happened. Soundarya keeps calling Bhavani, until she answers the call, and then, speaks to her in Neelambari’s voice.

Soundarya tries to find out why Bhavani was in Akhila’s room and discovers that she went there to steal money for Neelambari. To put an end to this, Soundarya tells Bhavani that she does not need the money anymore.

The Ghattammaneni family comes to the same temple where Abhi and Soundarya were completing their pradakshinas. Shiva Shankar starts repeating Abhi’s name. Akhila requests him to forget Abhi, when the high priest clarifies that it’s happiness when he talks about Abhi.

Bhavani offers to bring water to help Shiva Shankar and steps aside. She finds a glass of water and mixes some powder in it, discreetly. But Shiva Shankar faints upon drinking that water. Everyone rushes him to the car but Soundarya stays back. She calls Neelambari to understand the reason behind it.

Soundarya tells Abhi that Bhikshapati is under Neelambari’s surveillance, but Abhi does not believe her. Later, Bhikshapati comes to Abhi and asks for shelter. He adds that he has run away from Neelambari to tell Abhi the truth. Abhi listens to him but asks him to find the video, that’s when he will believe him.