From Bhavani warning Gani to Akhilandeswari visiting Abhi's garage read everything that happened in the last week. 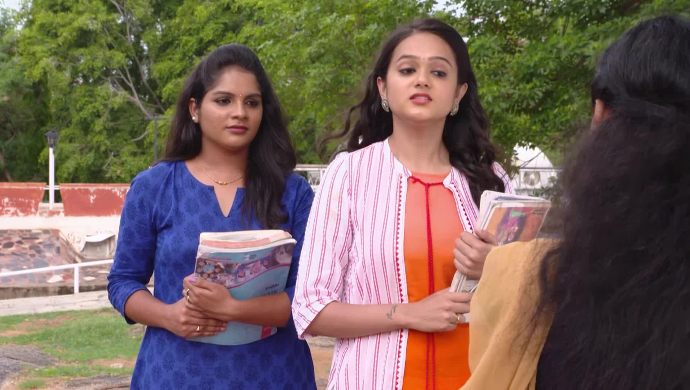 If you missed a bit or two in the last week, in the Telugu TV show Muddha Mandaram, we’ve got you covered. Akhilandeswari’s (played by Haritha) visit to the Indian garage and Bhavani’s visit to Gani’s house, Chaitra and Soundarya’s levelled up rivalry and more. Read what happened over the last week here.

You can also watch the week in short here:

The week starts off with Bhavani and her granddaughter entering Gani’s house and warning Gani and Sarsu to keep Soundarya in control. They even add how she has been close to guys. Sarsu does not hide her rage and tells them to stay away from Soundarya.

The next day, Surya asks Abhi what he’d like for breakfast and Abhi asks for idlis. He explains that he needs to stick to simple foods since the wound is still fresh. That’s when Soundarya calls Abhi through Chandrika’s phone.

Soundarya tells him that she has sent breakfast for both of them and he must at least thank her. That’s when Chandrika reaches with the tiffin and serves them.

Abhi attends the phone again and finds that Soundarya is still on call. She tells him that breakfast is actually to thank him for his help in the college play. She also asks him to meet his parents and clarify that there is nothing going on between them.

Sometime later, Abhi, Surya and Chandrika show up at Soundarya’s place and clarifies the buzzing rumours. Abhi confirms that there is nothing going on between him and Soundarya.

Just when Gani is about to enter the house, Abhi gets an urgent phone call from the orphanage’s caretaker and Gani only gets to see the back of his head.

Later in the day, Soundarya goes to meet Abhi and then meets Chandrika midway while going back home. The two girls start conversing when Chaitra tells Bhavani about them, in the car. Bhavani dashes them and gets down to teach them a lesson. But…

Soundarya intimidates Bhavani to get her cycle repaired and takes away her car keys. Bhavani has no guts to be as rude as she always is. Instead, she silently agrees to her demands and takes the cycle away.

Akhilandeswari gets information that the thief is staying at the Indian garage. Akhilandeswari asks Chandra Sekhar to take a backseat and she goes herself to meet the thief.

Surya comes out and introduces himself as Abhinandan. Akhilandeswari compares him with the picture taken from the CCTV camera at the bank and concludes that this fellow cannot be the thief. She even pours oil on his shirt to see if he has the wound. But in vain.

Chaitra’s newest move is to distribute beauty products in the college and ensure that Soundarya gets the highly dangerous one. Sometime later, she sees that Soundarya and Chandrika are telling all their friends about the incident involving her cycle and Bhavani.

The two start fighting and one of their classmates comes to tell Soundarya about the free beauty product samples that are being distributed. Just to provoke Soundarya, Chaitra claims to win the title of the most beautiful girl in the college.

What happens next? Stay tuned to find out. You can also watch the latest episode here. For more entertainment, watch Maate mantramu on ZEE5.

5 Dialogues From The RomCom Bommarillu That Are Our Forever Favourites