In the last week, Bhavani and Chaitra succeeded in their plans for once but at a greater cost for it. Read the weekly update here. 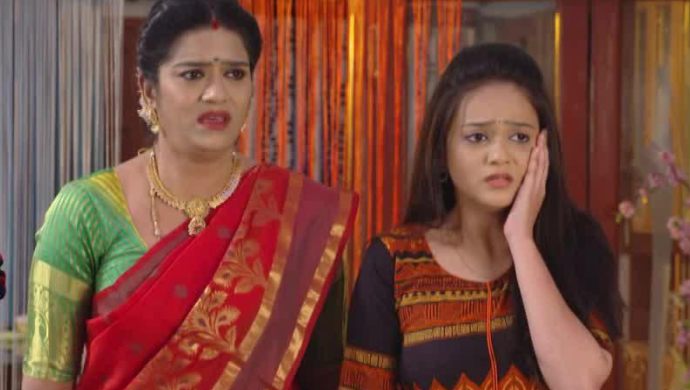 In the ZEE Telugu show Muddha Mandaram, Akhilandeswari stepped away from actively looking out for Gani and the thief. Gani and his family carried on with their lives, despite Bhavani’s death threats to keep Soundarya in control. Abhi and Surya, too, continued to do their good work and helped the kids meet their families. Chaitra sketches a plan to hurt Soudarya physically by giving her a harmful face cream. Here’s what happened in the week that started June 08, 2019.

First, we see Chandrika at Soundarya when she tries on the new cosmetic product given to her for free. Soundarya feels a burning sensation on her hand, where the product was applied, and Chandrika finds out that the box had her name written on it.

Soundarya sees the box and figures out that it has been Chaitra’s plan all along since the name on the box was written in her hand-writing. Soundarya decides to teach her a lesson in return and calls her.

The next morning in the garage, Abhi expresses his happiness to see the little boy meet his parents after many years. Surya responds by saying that he felt a void inside him to watch the kid leave the orphanage.

Soundarya meets Chandrika and promises to reveal her secret boyfriend’s identity. She asks her to have some patience and brings her to the garage. Finally, in the presence of Surya and Abhi, Soundarya reveals that Surya and Chandrika are each others’ secret lovers.

As per Bhavani’s plan, two women from Gani’s colony take a box of gold jewellery and go to Gani’s house. They ask for Soundarya’s rolled-gold jewellery, mix the boxes and trick Sarsu into keeping them together. They also sass Sarsu and Gani for being poor. Later, they leave the gold jewellery and take back the other.

At night, Chandrika asks Soundarya to accompany her to the ice cream parlour since she wanted to spend time with Surya. She mentions how Abhi will be there too.

Soundarya finds Abhi staring into the sky and starts a conversation but end up fighting again. Surya brings two ice creams and asks them to share one with each other. After some more fighting, Soundarya and Abhi share the ice cream too.

The following morning, Akhilandeswari tells Krish the story of Deva and Parvathi and the distances that they had. That’s when Abhi calls Akhilandeswari to tell them about Bhavani and Chaitra’s cheap tricks towards Soundarya.

Abhi hangs up, Akhilandeswari calls Bhavani and Chaitra into the living room and slaps the latter and scolds them collectively. When they deny to doing anything, Bhavani and Chaitra tremble. Akhila finally tells them to bring Soundarya home and prove their innocence.

ZEE5 Original Murder Mystery Neither Either Really Dead (N.E.R.D) Will Blow Your Mind Away, Watch Now