During the last week in the Telugu serial, Gani and his family make way to Ghattammaneni house and decide to stay there. Read the full update here. 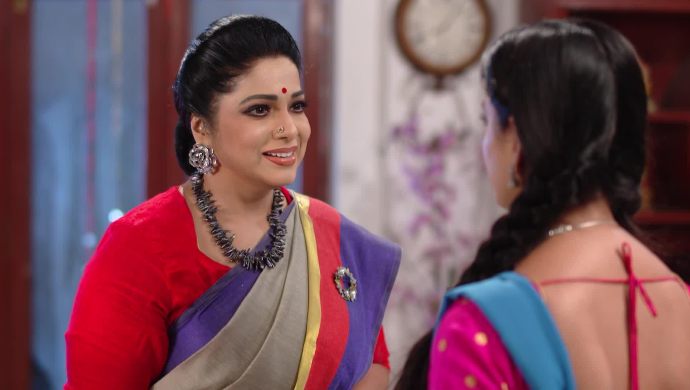 Previously in the Telugu TV show, Muddha Mandaram, Soundarya (played by Thanuja Gowda) had found out that Deva and Abhi (both played by Pavan Sae) look similar. She believes that Abhi and she have been reborn to fulfil Deva and Parvathi’s unrequited love. Abhi believes her too. But Gani sees it all and is concerned for his daughter. He goes to the Swamiji again and is told that Abhi and Soundarya’s union will be like inviting death. Here’s what happened next, during the week starting August 5.

Abhi agrees to let Gani relocate and brings tickets for them. But Gani thinks that it is Abhi’s move to find out their whereabouts and tears the tickets into pieces.

Gani tells Abhi, and then Chandrika and Soundarya, to leave them alone and let them move away if they want the best for Soundarya. He also tells Abhi that he is as good as death for his daughter.

Chandrika and Surya try to defend Abhi and the love between him and Soundarya. But Gani refuses to listen to any of it. Finally, Abhi decides to leave them all alone since Soundarya’s life matters to him more than his life.

Later, Soundarya comes back from the temple with the blessed vermillion in her hand. She meets Abhi midway and asks him to apply it on her forehead. But Abhi picks a fight unnecessarily to distract and make Soundarya hate him.

In the Ghattammaneni house, Bhavani cries and acts as if she has lost everything. But Chaitra asks her to stop the melodrama and that’s when Krish walks in.

Krish asks what was going on and Bhavani shows him the video where Gani refused to come to the Ghattammaneni house. Krish is surprised to see Bhavani’s efforts and affection for Akhilandeswari (played by Haritha).

The video is a fabricated piece that Bhavani had produced by threatening Gani. Her plan is to use it as evidence to make Akhilandeswari hate them and to stop them from coming home.

Akhilandeswari comes home and asks how pure Bhavani’s intentions were when she had asked Gani to come home. As Bhavani fumbles for a reply, Gani, Sarsu and Soundarya enter the house with their luggage.

Looking at them, Bhavani tries to threaten Gani, but Akhilandeswari asks him to stay strong and not be bothered by anyone. Bhavani and Chaitra try to threaten Soundarya, but she has an upper hand and gives them a befitting answer.

Soundarya looks at Deva and Parvathi’s photos and wonders if her love will succeed and whether she will ever be able to relive their legendary love story. Akhilandeswari sees her and calls her the ‘happiness’ of her house.

Akhilandeswari tells Soundarya to ask for whatever she wants, and she will bring it to her within seconds. Soundarya thinks about asking her to forgive Abhi, but stops herself when Akhilandeswari talks about the thief.

The next day, Soundarya goes looking for Bhavani and Chaitra but walks into Chandra Shekar’s room instead. He tells her about Parvathi’s life and Bhavani’s stupid gestures. He warns her to stay cautious of Bhavani.

Later, he shows her the digital sketch and asks if Soundarya has seen or met the person in the picture. Although touted to be the thief, Chandra Shekar is hopeful that just like Parvathi, Deva has taken birth again too.

Stay tuned to know what happens this week. Check the latest episodes of Ninne Pelladatha on ZEE5, before TV.

Rakhi Special: Have You Chosen A Gift For Your Sibling Yet?