Read the full update of everything that happened over the week, from July 15 to 19, here in the Telugu TV show Muddha Mandaram. 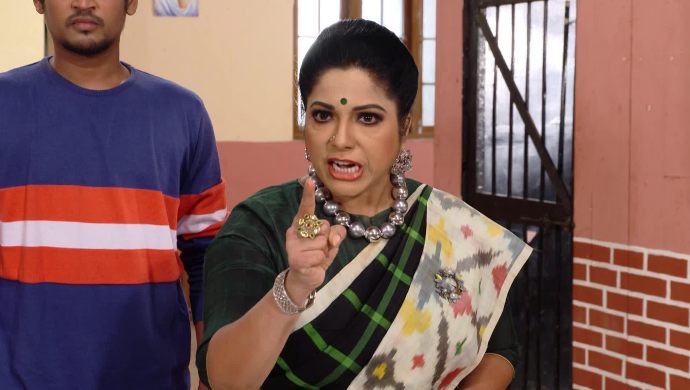 A few ups and too many downs defined the lives of the characters in the Telugu TV show Muddha Mandaram. We take a rundown of the week that was, starting July 15, here and catch up to speed with Soundarya (played by Thanuja Gowda), Abhi (played by Pavan Sae), Akhilandeswari (played by Haritha) and their families. Read the full update here.

You can also watch the last episode here:

The week started off with Bhavani succeeding in her plan. The police come to Gani’s doorstep and arrested him and Sarsu for theft. Soundarya tried to save them but was helpless.

Soundarya promised to get her parents out of jail and win back the respect and reputation that they had in the colony. Chandrika, meanwhile, narrated the situation to Abhi and Surya, who were packing up their garage, and they decided to help.

Soundarya realised that it was all Bhavani and Chaitra’s plan and decided to take Akhilandeswari’s help. But the grandma-granddaughter duo locked her up in the room and acted like nothing happened until Akhilandeswari left for office.

In the police station, Abhi brought along a lawyer to help Gani and Sarsu get out of jail. But since Gani had promised to follow whatever the cops said, Abhi was unable to help them. Though they do not lose hope and continued to look for other ways.

Later at night, Akhilandeswari asked Bhavani and Chaitra about Soundarya’s visit to the Ghattammaneni house. But Bhavani told her that the cycle belonged to one of the maid’s kid, who had come to take money.

Abhi figured out that Soundarya must be sad and angry because she was unable to get her parents out of jail. He visited her and told her to be strong and have hope. He even fed her dinner, since she had not eaten anything all day long.

On Abhi’s suggestion, Chandrika helped Soundarya record a video and they posted it on social media to spread awareness about the injustice that was happening to her parents because of a few rich people. Abhi told Surya to circulate the video as much as possible.

The next morning, Akhilandeswari called Bhavani and Chaitra and asked about Soundarya again. Because now, the maid had told her the truth. The two were at a loss to speak up in front of Akhilandeswari.

Akhilandeswari went to the police station and yelled at the inspector for doing such a corrupt thing. She demanded that the victims be released and apologised to Gani and Sarsu for whatever her family had done to them.

Akhilandeswari sent Bhavani and Chaitra to meet and apologise to Gani and Sarsu for their dirty deeds in front of the whole colony, just as they had insulted them.

Bhavani apologised as told, since Krish was present there, too. But she inched close to Gani and warned him to stay away from her and leave the city at the earliest.

Everyone went back to their daily routine. Meanwhile, Soundarya wanted to thank Abhi and Surya for their help and so, she decided to visit them at the garage. But when she reached there, she found out that the boys have to move out from their space.

Later that night, Soundarya brought coffee for her parents but they refused to take it until Soundarya vowed to starve herself. She told them that they can move out of the city but only after Bonalu. But secretly, Soundarya has planned something for the big day.

What’s cooking in her mind? Stay tuned to find out. Now, watch Ninne Pelladatha on ZEE5.