In the last week, Aishwarya-Mahi come back to India. Aishwarya sees Soundarya with Abhi and calls them Parvathi and Deva Bava. Read the full update. 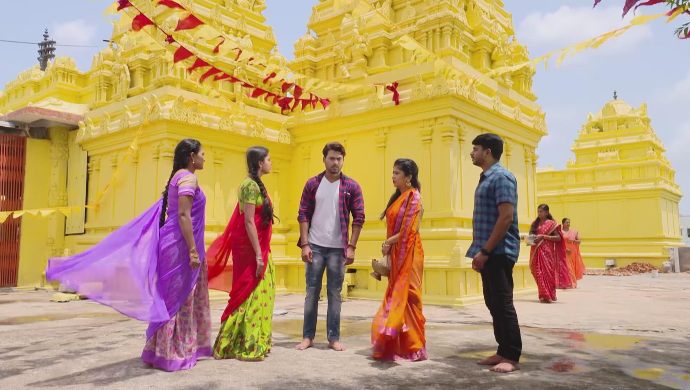 Previously in the long-running hit Telugu TV show Muddha Mandaram, Gani threatens Soundarya (played by Thanuja Gowda) to stay away from Abhi (played by Pavan Sae). He tells her that he will consume poison along with Sarsu if she does not comply with their wishes. Bhavani tells Chaitra to have fun with Krish and put him under her control. But Krish confesses that he does not want to marry Soundarya because he has feelings for Chaitra. Akhilandeswari (played by Haritha) calls Mahi and Aishwarya to come home at the earliest. Bhavani decides to ruin Abhi and Soundarya’s relationship. Towards the end, Chandra Shekar tells Akhiladeswari about Deva’s lookalike being around them just like Soundarya.

Bhavani comes to Soundarya’s room and calls her ‘Soundarya amma’, a word of respect here but sarcastically. She tells Soundarya to enjoy, now that she will soon be the lady of the house. Soundarya understands her sarcasm and gives her a crisp answer.

Soundarya tells Bhavani that just because she is sad and sulking, Bhavani cannot take advantage of the situation and corner her. Soundarya adds that she understands Bhavani’s cheap tricks. However, she isn’t as naive as her aunt, Parvathi was.

Bhavani and Chaitra think about how they can keep Soundarya and Abhi away from the house. Because if Abhi comes home, as Deva’s son, Akhilandeswari will willingly give away everything to him.

Akhilandeswari calls Soundarya in her room at night to have a discussion. She asks if Soundarya has feelings for anyone or if she would be willing to marry whoever Akhilandeswari chooses for her. Soundarya remembers what her father said and denies her feelings.

Bhavani sees that Soundarya and Akhilandeswari are in the room alone. She is scared about Soundarya telling Akhilandeswari about Abhi. So, she steps inside and distracts them by asking if the jewellers need to be called home or if Soundarya would like to visit the store.

The next day, everyone finds Soundarya unconscious with blood coming from her mouth. Gani and Sarsu cry about losing their daughter. Krish, Chaitra and the servant are speechless. But Bhavani reads out a fake letter that Soundarya has supposedly addressed to Abhi.

Soundarya recovers and later on the same day, Mahi and Aishwarya come back home from the US. Akhilandeswari introduces them to Gani, Sarsu and Soundarya. She also announces Krish and Soundarya’s wedding.

With Aishwarya’s help, Soundarya goes to the temple and meets Abhi. She tells Abhi how much she misses her and Abhi expresses his feelings too. She asks him to get rid of the stress but Abhi stands his ground because of the promise he made to Gani.

Aishwarya sees both of them and instantly knows that Deva and Parvathi are reborn to fulfil their unrequited love. She takes them inside the temple and tells Abhi to tie the mangalsutra to Soundarya.

In reality, Abhi and Soundarya go inside the temple and Soundarya holds burning camphor in her hand. She asks Abhi to marry her right then and there. But Abhi, too, holds camphor in his hand and tells Soundarya to not do anything stupid.

Bhavani and Chaitra manage to keep Abhi out of Aishwarya’s sight and take her away. Aishwarya meets Soundarya outside and tells her to tie a thread and ask the goddess to fulfil her wish. Aishwarya also tells Soundarya that she can always come to her to share her problems.

Read the previous updates of the show here. Watch the latest episodes of Ninne Pelladatha on ZEE5.