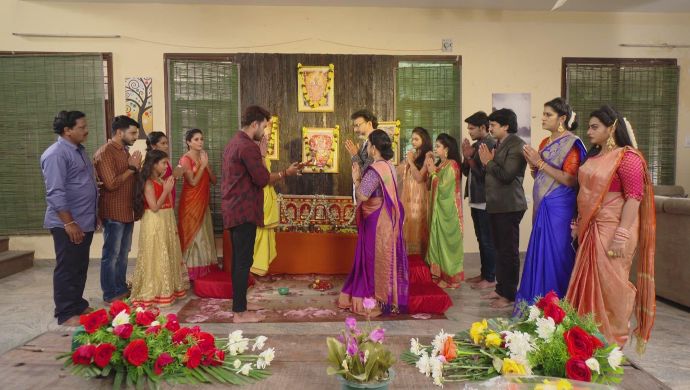 Earlier in the Zee Telugu show Muddha Mandaram, a sadhu comes to Akhilandeswari and tells her to do a certain pooja for her husband’s health. Akhilandeswari agrees to do it without a second thought. However, everyone tells her to think again. Neelambari tells Bhavani that it’s her plan to make Akhilandeswari suffer. The next day, Abhi and Soundarya get closer to each other as they go to collect things needed for the pooja. During the pooja, the goddess’ grace saves Akhilandeswari while putting Neelambari to test. Bhavani and Neelambari end up in the hospital beds with burnt feet.

Soundarya scolds Bhavani for continuing to be maniacal about wealth and her family’s prosperity. She tells Bhavani to cut ties with Neelambari. When Bhavani tries to raise her voice, Soundarya shuts her down by stating that she wants the best for this family.

Later at night, Abhi comes to meet Soundarya along with a pizza because she was craving for it. Soundarya is overwhelmed by his gesture and asks him where he found a pizza so late at night.

In the flashback, Abhi asks for Surya’s help in cooking a good pizza. But since Surya was sleepy, he leaves Abhi to deal with it alone. Abhi finds a video online and prepares the pizza for his wife.

Soundarya expresses her love by hugging Abhi at the gate. This is seen by Bhavani and Chaitra, who run towards Akhilandeswari. They tell Akhila that they need to show her how Soundarya is ruining their prestige and reputation.

Akhilandeswari does not believe them and tries to dismiss them. But since they wouldn’t shut up, Akhilandeswari goes to see what they were talking about. When she asks Soundarya what had happened, she informs that the watchman wanted food.

The next day, the entire family meets and decides how to celebrate Shiva Shankar’s birthday. Soundarya suggests visiting an orphanage and spending time with the kids there. Akhilandeswari is delighted to hear this and asks for more suggestions.

When Soundarya and Aishwarya tell Akhila that the only orphanage available on the given date is that of Abhi’s, Akhila rejects the idea. But they continue to convince her and Akhila agrees to go there if Abhi promises to stay away.

Abhi too rejects the idea when Soundarya tells him about the celebration. She tells him to see it as a boon for the children and Abhi agrees on the condition that he would not have to talk or see anyone from the Ghattammaneni family.

On the day, the priest begins the pooja with Akhila and Shiva Shankar’s name. Next, he also ropes in Abhi in the same pooja. This does not make anyone happy, other than Shiva Shankar and Soundarya.

Later, Abhi meets Soundarya separately and asks if she is happy. But Soundarya tells him that the gods do not have enough mercy on her. Because nothing she does is ever completed without obstacles.

Dive Into The World Of 'Hawala' And The Cricket-Betting World With The Latest ZEE5 Original, Stream Now

EXCLUSIVE: "I Can Get Audiences Hooked With A Crime Thriller," Kowshik Bheemidi On Hawala