Muddha Mandaram Weekly Update: Abhi And Soundarya Question Their Feelings For Each Other

From fighting to trying to be friends, to figuring out their emotions for each other, a lot is going on with our favourite young couple. 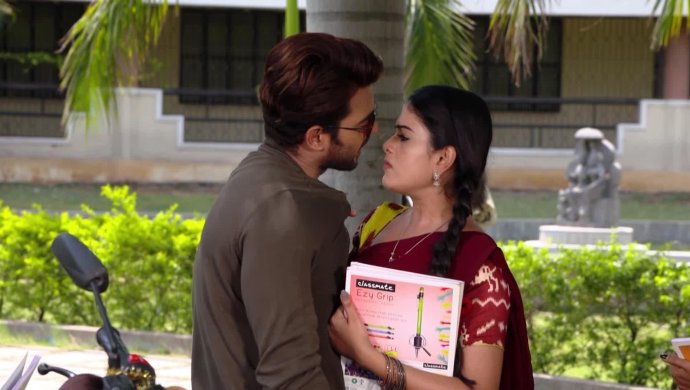 So far, Abhinandan and Soundarya (played by Pavan Sae and Thanuja Gowda), the alleged reincarnations of Deva and Parvathi from the Telugu show Muddha Mandaram, have been projected as the two youngsters who cannot stand each other. Their fights and arguments in the Telugu serial have been growing by the day and  there seems to be no end to it. And just when you start believing that there is a way out of their fights and romance is on the cards, it all comes back to square one. However, the struggle to understand their emotions seems to have begun already. Both Abhi and Soundarya have started to feel things that they do not want to and saying things that they wished were true. Watch what happened in the last week here:

Chandrika and Surya try to convince Soundarya to befriend Abhi. They tell her that Abhi is a good guy and wants to help. After some resistance, Soundarya agrees because she believes he has always been a good person.

Abhi is told that he must save Soundarya from the goons who have taken her away. He immediately rushes and returns with a bottle of cold drink. Soundarya is upset to see this and starts fighting, but Abhi starts flirting.

Meanwhile, at the Ghattammaneni house, Chandrashekar returns with details about Parvathi’s brother, Gani. Bhavani tries to throw shade at Shekar but Akhilandeswari (played by Haritha) yells at her. Later, Akhilandeswari compliments Shekar for the work.

On the other side, Soundarya’s mother orders that she will not attend lectures on that day due to a certain fasting ritual. Chandrika is excited to hear this, and tells Soundarya that she wants to fast for her lover.

In the middle of the day, Soundarya visits Abhi at his garage and sweetly tells him that she doesn’t want to fight anymore and is looking forward to their wedding day. After wooing him, she puts a hot spatula on his cheeks and runs away.

Akhilandeswari comes across a withdrawal of Rs 1 lakh. Her accountant informs her that it was done by Bhavani. When asked, Bhavani hesitates, but reveals that it was for Krish and Chaitra’s pocket money.

Abhi dreams of romancing Soundarya and she has had her share of questions too, with Abhi being on her mind the whole time. Considering this, Abhi decides to invite her to the press interview. But she declines.

Later, Abhi sees Soundarya all decked up outside the media channel’s studio and starts making fun of her. There they start fighting and after being pulled by Abhi, Soundarya ends up kissing him.

What happens next? Watch this space to know more. Until then, check out Kalyana Vaibhogam on ZEE5.