From announcing about Abhi's thefts to dressing up as a ghost to scare him and more! Here's your round-up of everything that happened so far 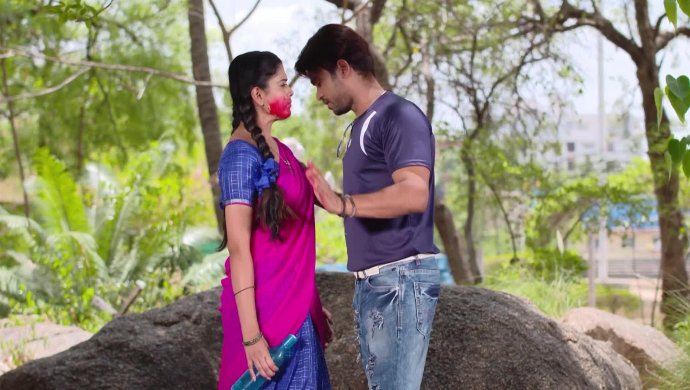 By any chance, if you have missed out on the masala that is stirring up in the Telugu TV show Muddha Mandaram, we’re here to save your day… actually, save your week! We break down all that happened in the show in the week starting May 6, 2019. The heat between its lead characters Abhinandan and Soundarya, played by Pavan Sae and Thanuja Gowda, has been on the rise. And the drama has been getting more and more interesting.

The week starts with Soundarya standing on a small platform and calling out to her college mates. She announces and warns them about a thief roaming among them. She describes Abhi, but refuses to take his name.

After the announcement, Soundarya drags her friend Chandrika along with her as she puts up posters about Abhi, without taking his name. In a classroom, Chandrika leaves Soundarya for some time and that’s when Abhi enters. He comes from behind, picks her up and then drops her when she asks him to leave her alone.

Chandrika later takes Soundarya to her room and asks for the love letter. Soundarya replies saying that she had forgotten about writing the letter as Abhi had caused too much trouble and she had been unable to think of anything else.

That’s when Soundarya decides to teach Abhi and his friend Surya, who stay together in the garage, a lesson. She tells Chandrika that they must head to their garage at night and scare them by dressing up like a ghost.

After being scared initially, Abhi figures out that the ghost is, in fact, Soundarya and ties her legs with a rope. Soundarya’s plan backfires, but Chandrika comes to the rescue again. She apologies to Abhi and takes her back home.

The next day, Abhi finds Soundarya alone near the college and starts teasing her about the previous night’s stupidity. He even puts a red-coloured cross on her face to tease her. In the meantime, Akhilandeshwari had left home in a panic and had forgotten to take her medicines. Soundarya finds her unconscious in the car and goes to help her.

Soundarya gets an aspirin tablet for her. Akhilandeshwari is grateful for all that the girl has done. Soundarya suggests that it would be wrong on her part to leave her alone in such a vulnerable state. So she gets in the car and offers to accompany her till home. When they reach, Akhilandeshwari offers her money and a saree as a blessing.

Soundarya refuses to take the money. She thanks Akhilandeshwari and leaves with the saree. When she reaches home, she tells her parents Sarsu and Gani about having met Akhilandeshwari. Gani is a scared that he will lose his daughter to the Ghattammaneni family, just like he lost his sister Parvathi. He calls his manager and urgently asks for a transfer.

Keep watching this space for more updates. Until then, check out what’s happening with Jai and Manga in Kalyana Vaibhogam on ZEE5.