Beach or pool side? Kids therapy is what is keeping Abhinandan from the popular show cool even as the mercury rises. 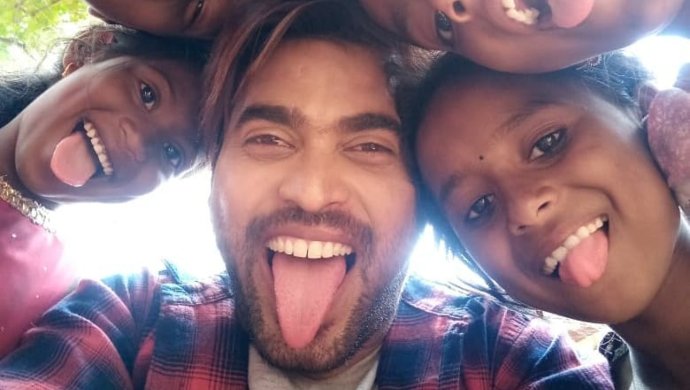 The heat brewing between Abhinandan and Soundarya from the Telugu show Muddha Mandaram is intensifying further. And the mercury has also been rising across the country.  Most of us are either reaching out for an ice cream or gulping down cold water. But the actor playing Abhinandan, Pavan Sae, has found a rather interesting solution to deal with the increasing heat.

To know what it is, you need to check out his latest Instagram post says it all. Scroll down for more.

My summers are cooler with these kids around 🤘🤘😎😎

These pictures on Pavan’s Instagram are from the sets and the kids are his family in the show. He captioned the pictures with “My summers are cooler with these kids around.” On screen, we have seen that Abhi annayya is a favourite with the little ones. But now we’re sure that he is loved equally, if not more, by the kids even when the camera isn’t rolling.

For the ones wondering what’s up with these pictures, let us guide you. In Muddha Mandaram, Pavan was initially seen as the ideal elder son, Deva, of the Ghattammaneni family. After much struggle and problems, his life with his wife Parvathi, played by Thanuja Gowda, was beginning to seem perfect. Just then, the couple died in a car accident. Post that Pavan and Thanuja were reintroduced to us in the show as Abhinandan and Soundarya.

Abhi, as he is fondly called in the show, is shown to be an orphan who has been living in a garage that he runs. His friend Surya and a bunch of kids in his street have become his only family. Soundarya, on the other hand, is born to Parvathi’s younger brother Gani. Because the sibling bond was stronger, Gani treats his daughter as another avatar of his own sister.

Enjoyed it? Be sure to catch up on all the drama that’s happening on Muddha Mandaram. Also, you can check out what’s cooking between Vamsi and Vasundhara in Maate Mantramu on ZEE5.

Birthday Special: 6 Lesser-Known Facts About Sai Pallavi That You Must Know