Muddha Mandaram 10 July 2019 Preview: Chandrika And Surya Find Out About Their Secret Love

In today's episode, Chandrika and Surya find out who they have been secretly in love with all this while. Find out all the details here. 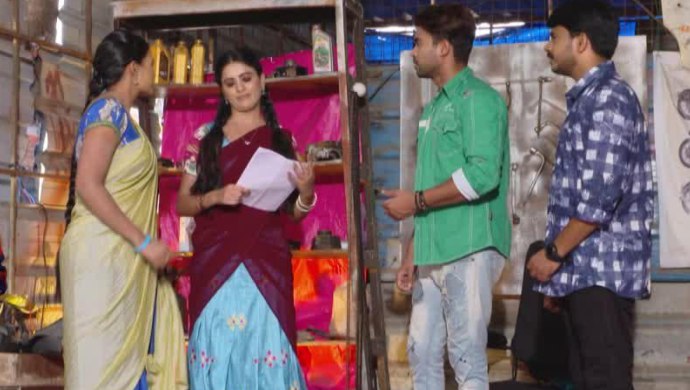 We have all been waiting for Abhi and Soundarya (played by Pavan Sae and Thanuja Gowda), the reincarnation of Deva and Parvathi, to fall in love for a long, long time. It seems like a distant dream even today in the Telugu TV show Muddha Mandaram. However, a parallel love story had been going on between Soundarya’s best friend Chandrika and Abhi’s best friend Surya. The two had been exchanging love letters online, texting each other and were in love for long. Everything between them happened without meeting or seeing each other. Finally, after many months, it looks like the time has come…

In the preview for the episode airing on July 10, we see that Soundarya brings Chandrika to Abhi’s garage, where Abhi and Surya both seem to be waiting for Soundarya. As soon as the girls enter, Surya excitedly gets up and greets her. Abhi wonders what’s with the sudden happiness and Soundarya tells everyone that she has answers to the long-standing mystery. She takes the letters from Chandrika and tells everyone that some love letters aren’t written on one’s own but are someone else’s creativity. Chandrika tries to stop her but Surya asks what the conversation was about. That’s when Soundarya confirms that the letters hanging in the garage are all written by her although she wrote them for Chandrika’s lover.

Surya still looks like he needs to hear the exact words. So Soundarya tell everyone that Surya is Chandrika’s secret priyudu and Chandrika is Surya’s prema. All three of them are surprised to hear this and take a moment to process everything that just happened. Now, we have to watch if Surya, too, tells the girls that his letters were written by Abhi. In that case, Abhi and Soundarya have been writing love letters to each all this while. Will things change for them, too? Watch the full episode here. Stay tuned for more updates.

For more entertainment, check out Kalyana Vaibhogam on ZEE5.

Watch The ZEE5 Original Feel-Good Film Ala For A Good Time, Streaming Now.

Guess Which Of Your Favourite Stars Just Made His Instagram Debut?

Vamsi And Vasundhara Are FINALLY A Couple! Here's How It Happened