Looks like Akhilandeswari is finally close to fulfilling Parvathi's last wish. But who's going to put a spanner in her plans? Watch out! 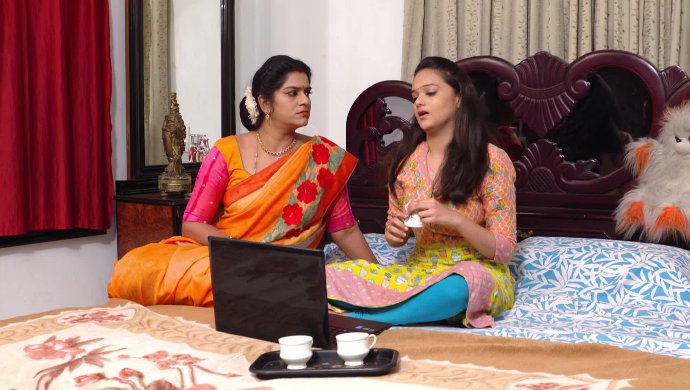 In the last few episodes of the Telugu TV show Muddha Mandaram, we have seen that Akhilandeshwari (played by Haritha) desperately wants to bring Parvathi’s younger brother home. She is making all the possible attempts at fulfilling the only wish that her late daughter-in-law had. Akhilandeswari appointed Chandra Shekhar to take care of the matter and find out about Ganesh Meghoti’s whereabouts. Initially, Chaitra and Krish were waiting to see their granny happy and so volunteered to help Chandra Shekhar in his investigation. However, things seem to have changed now in this Telugu serial.

In the preview for the episode airing on June 6, 2019, we see Chaitra in Krish’s room alone with his laptop. She is going through the data collected by Chandra Shekhar to find out about Gani. Finally, she manages to trace out details of Ganesh Meghoti and goes running towards Bhavani. In the kitchen, Bhavani is splashing water on her face when Chaitra asks: “Nee asala meeda neellu padataini, moham meedakuda neellu challukuntunava?” (because your dreams will drown, are you splashing water on your face, too?) Bhavani tells her that she is splashing water just to keep herself awake.

That’s when Chaitra tells her that she has found out Ganesh Meghoti’s current address. The two rush towards her room to see the good news. But in the meantime, Akhilandeswari, who was passing through the room, sees the laptop and wonders where Chandra Shekhar was. She steps in and picks up the laptop to see that Ganesh’s address has been listed. She waits for Chaitra and Bhavani to come in. What happens next? That’s something we have to wait for.

Until we find out what Akhilandeswari does with Ganesh’s address, you can catch up on Maate Mantramu‘s latest episodes on ZEE5.

Watch The Love And Bond Of A Big Fat Indian Family In Brahmotsavam Ft. Mahesh Babu And Samantha On ZEE5

Thriller Shows And Films: Here's How ZEE5 Is Making Your Month Of June Amazing