Ghattammaneni Akhilandeswari and Abhinandan are in close proximity of each other. Read to know the details. 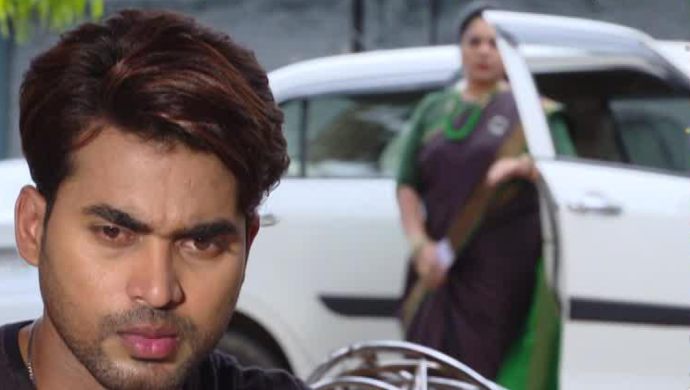 In the Telugu TV show Muddha Mandaram, Ghattammaneni Akhilandeswari (played by Haritha) has sworn to find out the thief. The person who called her and had the guts to warn Akhilandeswari had now stolen money from her twice. The first time, he smartly engaged Bhavani in a random conversation with a passerby. And the second time, he stole money as just he said he would. This behaviour not only annoyed Akhilandeswari, but has also affected the whole of the Ghattammaneni family. Chaitra, Krish, Bhavani and Akhilandeswari’s loyal employee Chandra Shekar, everyone has decided to find out the thief and make him learn a lesson that he will never forget. But what happens when Akhilandeswari finds out that this thief is none other than her own long lost grandson?

In the preview for the episode airing on July 4, we see that Surya and Abhi (played by Pavan Sae)  are busy doing their job at the garage. Suddenly, Surya looks up to see a plush white vehicle standing across the road. As the windows roll down, it is revealed that Akhilandeswari is on the driver’s seat. Surya trembles and hurridly informs Abhi about it. But words do not come out of him without stuttering. Abhi turns to see what Surya is trying to tell him and quickly turns his back towards the car outside. Surya asks Abhi if Akhilandeswari has learned the truth about their theft. Abhi seems to be speechless.

However, Akhilandeswari rolls down the window of her car but does not look around. Right now, we do not think that she is out on the quest to take down her enemy. In such a case, how did she land up there? What is the motive behind her visit to this colony? Is she trying to find Abhi or Gani, who stays close to Abhi’s garage? Stay tuned to find out.

Meanwhile, check out all the episodes of Ninne Pelladatha on ZEE5.

A Bunch Of Youngsters And A Relatable Story. Watch ZEE5 Original Ala For A Fresh Experience, Streaming Now