Now that we know the lead, Gangadhar, and his most trusted aide, let's meet the badman of the ZEE5 Original Chadarangam. Also, 3 new posters inside! 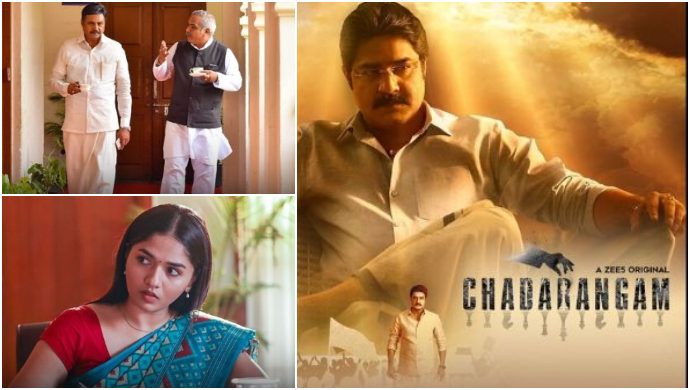 The countdown for the brand new ZEE5 Telugu original Chadarangam has begun. Toplined by actor Srikanth Meka, the political drama premieres on February 20. The story takes inspiration from the real events that unravelled during the reign of superstar NTR’s Telugu Desam Party in the 1980s. However, the makers have taken creative liberties to suit the show to contemporary times. With only a week left for the series’ premiere, the makers have launched three new posters. Check them out below

Watch the trailer of the show here:

The latest poster has the lead actor, in his character as Gangadhar, sitting on his seat. As he looks down, we also see a huge crowd of people with banners and flags. Overlapping the crowd, we see Gangadhar standing all by himself. Through the trailer, we already saw that the character sees a huge up and down in his political career. This poster makes it clear that one has to start from bottom and make their way to the top.

The next poster introduces the lead antagonist of Chadarangam. Here, we have Nagineedu essaying the role of Rama Krishna Rao Erra, better known as RK. A professor by profession, this man turned to politics to help a friend form a party of his own. However, things take a turn after the protagonist forays in this field too.

Sunainaa, who was previously seen as Radhika in High Priestess, returns to ZEE5 with Chadarangam. She plays the role of Kranthi, who has been described as the one “meant to achieve great things”. However, a certain “past might catch up with her”. Since not much has been spoken about the character, we await to solve the mystery around her.

Read more about the show here, and save the date to watch this gripping political drama, releasing on February 20, 2020. You can also enjoy the rerun of Gods Of Dharmapuri on ZEE5.

ZEE5 Original Chadarangam: The New Trailer Packs A Punch With Its Powerful Dialogues