Meenakshi 21 May 2019 Preview: Meenakshi Senses Kartik And Roshini Together Again

Meenakshi is finally at peace after marrying Kartik. But little does she know of the activities going on behind her back. Does she get any hint? 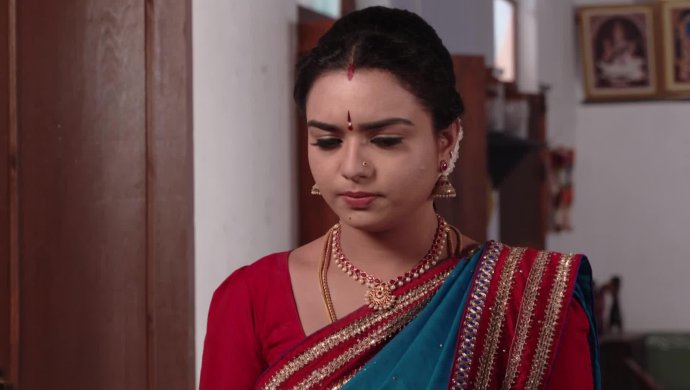 The lead character of the Telugu TV show, Meenakshi, was just beginning to settle down with the thought that her life is finally devoid of trouble and society’s cruelty. She married Kartik, who made her believe that they were going to be a happy couple. But Roshini, Kasi’s wife and Kartik’s girlfriend, is in the same house and won’t let him happy with Meenakshi. Kartik, though, truly wants to live a happy life with Meenakshi and take Roshini and her maternal family down. With the help of her family members and Kartik’s honesty, will Meenakshi be happy again? Here’s what happened in the episode dated May 20, 2019.

In this episode, the police inspector, who was assigned to find the criminals behind the death of Meenakshi’s father Nagabhushanam, found a key chain with the letters ‘R’ and ‘K’ written on it. Seeing the locket, the inspector looks confused. But we know that it is the first clue in catching Roshini and Kartik red-handed. What happens next is something that we have to wait for. But what we know is that in the next episode, Meenakshi searches for her husband Kartik in the house. Finally, she finds him. Kartik, who had just stepped out of the shower, was in conversation with Roshini when Meenakshi enters. Looking at her, Kartik and Roshini are petrified but Kartik tries to manage the situation.

That is when Meenakshi calls out, “Pedda Vadina (Elder sister-in-law)?”, because she could smell the distinct fragrance of Roshini’s “perfume from London” — something that she never stops flaunting. Another thing that we know will happen is Meenakshi slipping on a banana peel and hurting herself. Was this a part of Roshini’s plan, too? Will Meenakshi suffer any more because of the sudden fall? Let us know your thoughts and theories in the comments below.

For some light-hearted entertainment, check out Vamsi and Vasundhara’s banter in Maate Mantramu on ZEE5.

5 Reasons You Must Rewatch The Ram Charan And Rakul Preet-Starrer Bruce Lee: The Fighter