Mansi Marries Gaurav At The Cost Of Mrudula’s Life, In Ninne Pelladatha

In today's episode, Mansi finally marries Gaurav. But there's a twist that she has added, raising the stakes higher. Scroll down to find out. 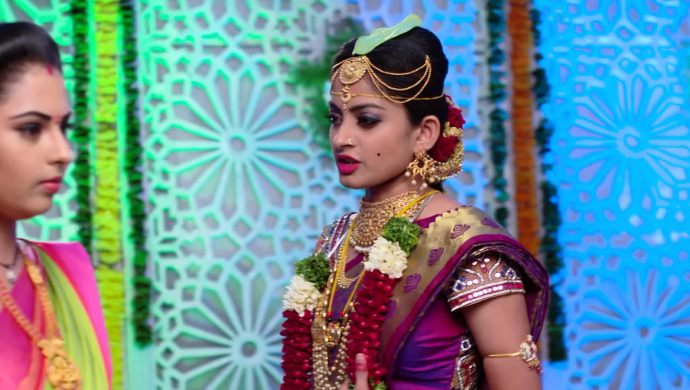 In the Telugu serial Ninne Pelladatha, Mansi (played by Sree Priya) had agreed to marry Swaroop even though Brahmini had vowed that Madhu (played by Abhi Prathap) will be tying the mangalsutra around her neck. But moments before Madhu sat down for the wedding, having fallen prey to his mother’s evil plans, Gaurav made an entry. He stopped Brahmini from destroying two more lives and offered to become Mansi’s husband and Arjun’s son-in-law, something that he had always dreamed of. But Mansi was opposed to marrying anyone against her wish. She exclaimed that she wasn’t a puppet who would move as her family members wanted her to. If not with Madhu, she wouldn’t marry, at all. That’s when Arjun had a chest-ache and declared that he would either be dead or see Mansi get married to Gaurav. What happens next? The great plan.

In case you missed it, Mrudula (played by Madhubala) tried to save the situation and asked for a chance to convince Mansi. No one had any hopes from Mrudula or Mansi but taking a chance, at this stage, could do no harm. So, they all agreed. Mrudula went into the dressing room to speak to Mansi. She told her about the current state of the house and the brokenness of the family. She tried to explain that they, as daughters, must try to lessen the burden of their family. That’s when a new plan struck Mansi. She demanded that Mrudula swear to stay away from Madhu for the rest of her life. And only then, Mansi would agree to marry Gaurav without flinching. Yes! Mrudula swore.

Now Mrudula has to walk away from Madhu and from the Kamineni family. Sarayu (played by Sarayu Roy) justifies it by telling Mrudula that Mansi did not marry the man of her dreams — because Mrudula married him. And Sarayu couldn’t marry the man of her dreams — because Mrudula helped Tarun marry Tanaya. When two women get hurt by the actions of one, she shouldn’t be happy either. What lies ahead for Mrudula? Her only source of hope and happiness, Madhu, has also started ignoring her. Let us know what you think in the comments below.

Maate Mantramu 31 July 2019 Spoiler: Ayirendri Goes For The Truth, For Once