Maate Mantramu: Nakshatra Or Vasundhara, Who Will Take A Step Towards Marriage With Vamsi?

During the homam, the fake Vamsi has to pick between Nakshatra and Vasundhara. One of the two will take a step ahead towards marriage with 'Vamsi'. 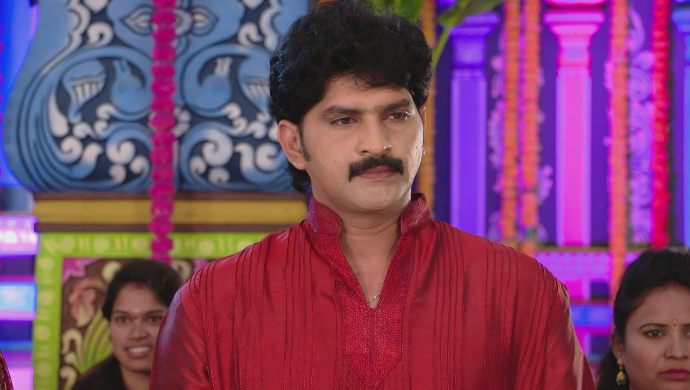 After making everyone believe that Vamsi has a new face and personality, what’s next ? That has been the one question on our minds for a long time, in the Telugu TV show Maate Mantramu. The unknown and creepy Murali might have managed to pretend that he is Vamsi Krishna Kakarla (played by Ali Reza). But he can never get into the skin of Vamsi or have the same aura as the real Vamsi. And who better than Vasundhara (played by Pallavi Ramisetty) to study such intricacies. Well, she truly believes that her Vamsi Sir is out there somewhere and she cannot fall into another man’s trap. But does that stop the conman Murali from trying his luck? It does not!

In the last week, the Kakarla family decided to host a grand celebration just to welcome the lost happiness and joy into their family. So, Suchitra Devi decided to start by conducting a homam. Discreetly, she wanted to put an end to their turmoils and marry Vamsi and Vasundhara, for good. Vasundhara is in a fix. She wants to help the Kakarla family with all that she can but the man in front of her does not seem to be hers. Suchitra Devi hands over the mangalsutra meant for Vamsi’s wife to the fake Vamsi, Murali. The nature bangs (windows) its way to Suchitra’s heart but the fake Vamsi tells her to avoid those signals.

Now that the homam is only a few hours away, who will Vamsi pick as his partner? Between Vasundhara and Nakshatra (played by Tulasi Yerra), one would sit with Vamsi for the homam and bring prosperity to the house. Not only that, this will also take them a step ahead towards their holy union. As expected, Kantamma and Ayirendri (played by Ramya Raghav) will fight to keep Vasundhara away (because of their belief that she has been sexually exploited) and take Nakshatra ahead (because Vamsi was engaged to her).

In such a situation, what could be the possible outcome? Let us know your theories in the comments below. Check out more episodes of Maate Mantramu and more interesting stories. You can also find Muddha Mandaram on ZEE5 before TV.

Looking To De-Stress? Try 'Allari' Therapy By Watching The Superfun Brother Of Bommali