Maate Mantramu: Murali Forces Vasundhara To Believe That He Is Vamsi Himself!

In today's episode, Vasundhara finally comes across the man who has been claiming to be Vamsi for the last few days. Read more about it here. 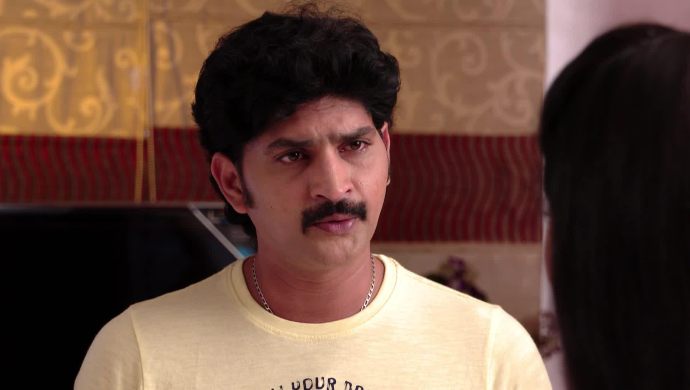 Raise your hands if you are puzzled about Murali from the Telugu TV show Maate Mantramu! Wondering who we’re talking about? Here’s a little flashback — Vamsi (played by Ali Reza) tried to tell Vasundhara (played by Pallavi Ramisetty) to forget about the society and marry him. But she asked him to walk away. Vamsi promised to come back but met with an accident and slipped into a state of coma. Before the accident, Vamsi had saved a man named Murali, who is going through financial trouble. Vamsi had told him about the problems he was facing in his love life too. He had also promised to help him, but Murali did not bother to wait till Vamsi recovered. Instead, he used Vamsi’s phone and had transferred the money he needed to his account. And now… it seems like phase two of his evil plans has begun.

Here’s what we’re talking about:

In the latest episode, we see that Vamsi convinces everyone from the Kakarla family that he is the real Vamsi Krishna Kakarla. After some hesitation, Appu and Suchitra buy his story. Anand, too, wants to believe that this man — who has features which are entirely different than Vamsi — is now his brother. However, Nakshatra (played by Tulasi Yerra) and Ayirendri (played by Ramya Raghav) are curious about the fact that ‘Vamsi’s’ face has changed (and aren’t we thankful for their curiosity!). When Murali, pretending to be Vamsi, walks out of the hospital room by saying that his priority is Vasundhara, Suchitra decides to make the love birds meet again.

Murali makes his way to Kantamma’s house and sees that she is making Vasundhara marry Jogendra. Vasundhara had agreed to get married to put an end to the ongoing torture. However, she plans to put Jogendra to sleep forever. Murali, claiming that he is Vasundhara’s Vamsi and Vasundhara’s ‘Ramudu’, scares Jogendra and his men. He tries to tell Kantamma to leave Vasundhara alone, but she isn’t here to buy his story. Vasundhara, too, is sceptical. Surprisingly, the con-man Murali knows enough details to prove his originality. But Vasundhara seems quite muddled.

Dear Vasundhara, take it from us. Please don’t fall for his lies. Keep your search for the real Vamsi going. What do you think Vasundhara needs to know right now? Share your thoughts in the comments below. For more entertainment, watch the latest episodes of Attarintlo Akka Chellellu on ZEE5.