Maate Mantramu: In The Midst of Murali’s Identity Crisis, Anand And Alekhya Get Married

In the latest episode, Anand and Alekhya tie the knot secretly. But how will this move pan out for Vasundhara and Murali? Read more about it here. 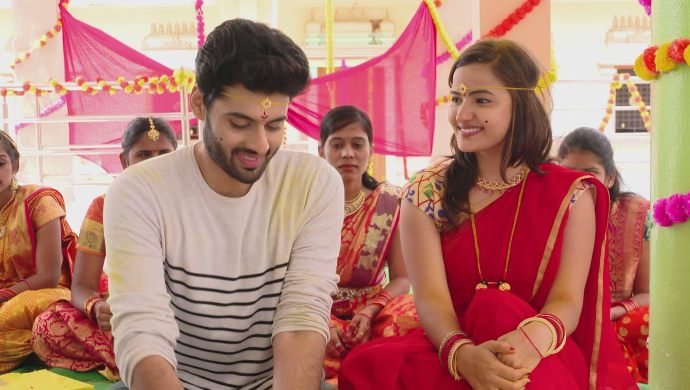 What’s a bright, sunny day without some trouble for the Kakarla family? In the Telugu TV show Maate Mantramu, somehow and in some way, troubles weave themselves around the good people. Vasundhara (played by Pallavi Ramisetty), (the real) Vamsi (played by Ali Reza), Anand and Alekhya have been struggling to find some peace and solitude. But will or will they never find it? That is the question! Now, in Vamsi’s absence when Murali’s pretending to be Vamsi, a lot has gone for a toss. Will the conman stop until he gets what he wants? How far will he go to ‘achieve’ his evil desires? But more importantly, we wonder if anyone will find out his trap.

First and foremost! Anand and Alekhya married each other in a temple, without anyone’s knowledge. Surprisingly, they did not know what they were walking into either. Nevertheless, the long impending and dreamt of wedding came true. Fake Vamsi, a.k.a. Murali and Vasundhara opposed this decision. But when one tries to hurt them, they stand as guard. However, Vasundhara feels guilty of having to hide the truth about Jogendra’s cruelty with Alekhya. Anand feels guilty for being unable to take his now-wedded wife home, rightfully.

The only person who remains unaffected is Murali. And that is because he does not know that Vamsi and Anand shared dreams of having a grand wedding and bringing home their beloved lovers as wives. Vasundhara believed that her Vamsi was back and it took only a moment. And Murali was happy that he was succeeding in his plan. We are waiting for a force to tell Vasundhara the truth. In the midst of all the chaos, how will things pan out for Murali and Vasundhara? It’s highly likely, given the moment of attraction, that Vasundhara settles down for Murali’s lie as the truth.

Stay tuned for the latest episodes and more interesting stories about Maate Mantramu. Check out Attarintlo Akka Chellellu on ZEE5.

Kalyana Vaibhogam: Will Chandrika And Prasad Do Nithya's Job Properly This Time?