Maate Mantramu 27 June 2019 Preview: Not A Friend, Vamsi Wants To Be Vasundhara’s Husband

After all this time, Vamsi has spoken the golden words that we all have been waiting to hear. But is this reality or just our fantasy? 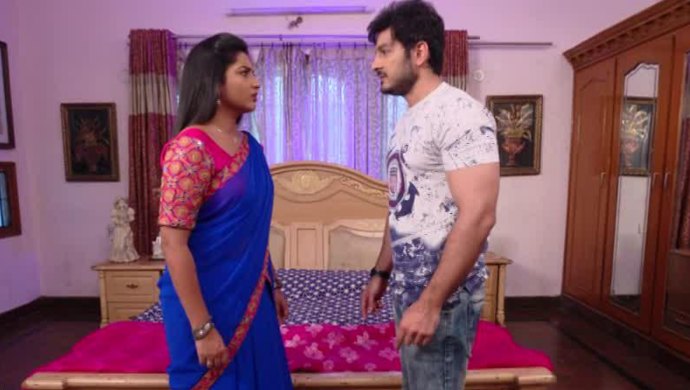 The urge to believe that it’s all happening is too real. But our dreams have been burst too often to expect anything so soon. Yes, we’re talking about the relationship dynamics between Vamsi and Vasundhara (played by Ali Reza and Pallavi Ramisetty), in the Telugu serial Maate Mantramu. It was just a few days back when Vamsi decided not to ‘be tempted’ by Vasundhara in the isolated cottage. He somehow, against his will, came back home without Vasundhara. And this bothered him more than his own ill health. He went back in a broken state and brought Vasundhara back to life. The new Vamsi was more empathetic and emotional. He wanted to put an end to his arrogance and extend the hand of friendship towards Vasundhara. Now, things seem to be escalating faster than we expected.

Watch what Vamsi does here!

In the preview for the episode airing on June 27, 2019, we see Vamsi meeting Vasundhara in her room in the Kakarla house. He tells her that he wants to be friends now and put an end to their silly fights. Vamsi reminds her about how he put the engagement ring on her ring finger and not on Nakshatra’s (played by Tulasi Yerra). Vamsi subtly asks Vasundhara: “What is the big deal if I want to be your husband instead of being only a friend?” Just like us, Vasundhara too is spellbound and confused. All that she manages to utter is: “Sir, what are you saying?” This confusion makes Vamsi anxious and he is unable to say anything further.

All he does is drag her to the pooja room in the house. And tie the mangalsutra, in front of Nakshatra and Ayirendri. Everyone is equally shocked to see what just happened. It all seems too good to be true, right now. Is this even real? Or just our fantasy? That’s what we have to wait and watch.

In the meantime, check out Ninne Pelladatha on ZEE5.

Have You Seen Jr NTR And Pooja Hedge Take Your Breathe Away In Aravinda Sametha Veera Raghava Yet On ZEE5?

In Ninne Pelladatha, Not Just Home, Now Brahmini And Mrudula Are Enemies At Work Too