Maate Mantramu 21 May 2019 Preview: Vasundhara Gets Kidnapped. Will Vamsi Save Her?

Nakshatra, Ayirendri and Kantamma are hating their closeness. What scheme will they try next to separate the couple? 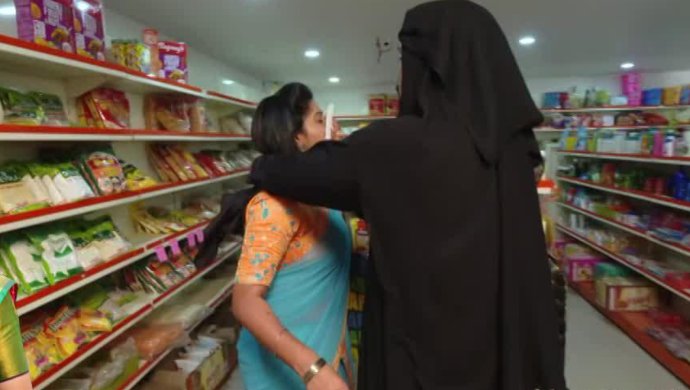 Quite a bit of drama has unfolded in the Kakarla household of the Telugu TV show Maate Mantramu since Vamsi’s engagement. That includes Vamsi getting engaged to Vasundhara instead of Nakshatra. And obviously, this incident has offended many — right from Nakshatra herself to Vasundhara’s grandmother Kantamma. The female squad — Nakshatra, Ayirendri and Kantamma — hasn’t given up on their attempts to kill, destroy or exploit Vasundhara. But the smart girl knows the best path for her. Currently, her focus is set on marrying Vamsi only. Here’s what happened in the last episode, telecast on May 20, 2019.

Vasundhara has been trying to get Vamsi’s attention even as he tries hard to ignore her. However, thanks to their circumstances, Vamsi cannot survive without her by his side and this leads to funny banter between the two. By now, Vasundhara is sure that Vamsi loves her and is waiting for the day when they can get married and stay happily together. This is exactly what Vamsi’s mother Suchitra Devi wants. Looking at Vamsi and Vasundhara being cheery and playful has been tormenting the female squad. Ayirendri, tired of her attempts, tells Kantamma to do something at once.

In the latest episode telecast on May 21, 2019, Vasundhara is seen in a supermarket, busy shopping for Vamsi. That is when Jogendra, Kantamma’s friend who is obsessed with Vasundhara, comes to the supermarket dressed in a burkha. There he uses a handkerchief with chloroform to make Vasundhara unconscious and takes her to his car. While leaving the supermarket, Vamsi looks at two odd women in burkhas and seems confused at the sight. Will he recognise Vasundhara and save her? Watch what happens in the next episode.

Until then, check out what’s happening with Madhu and Mrudula in Ninne Pelladatha on ZEE5.

Have You Binge-Watched The Amala Akkineni-Starrer ZEE5 Original Thriller Series High Priestess Yet?

Is It Really The End For Mrudula In Ninne Pelladatha?

PLOT TWIST: Nithya Joins Hands With Chandrika And Her Husband To Kill Manga