Vamsi escaped the Kakarla house to seek nature's harmony and solitude. But fate has different plans for him it seems. 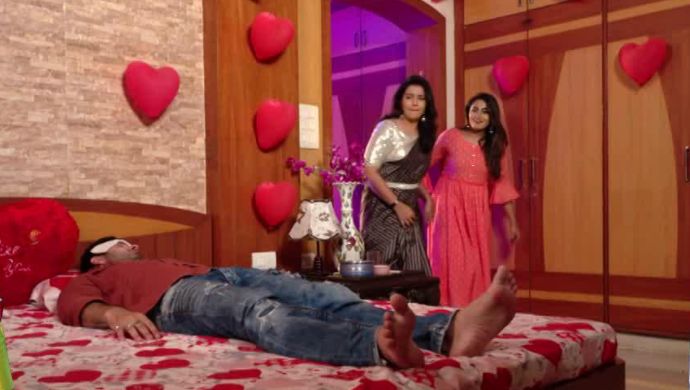 The ultimate end of Vamsi’s (played by Ali Reza) peaceful life is about to come in the Telugu TV show Maate Mantramu.  He had opted for peace and solitude, leaving his family behind and going to an isolated cottage in a forest. However, things didn’t go as planned. He unknowingly saved Vasundhara (played by Pallavi Ramisetty), who remained with him in the cottage due to lack of network. Eventually, Vamsi started to address his feelings for her. Check out what happens next in the Telugu serial:

In the preview for the episode that airs on June 13, 2019, Nakshatra and her mother Ayirendri successfully locate Vamsi’s isolated cottage hidden in the woods. The snake charmer and his wife are also in the car with them. Later, we also see that Nakshatra and Ayirendri have successfully entered the cottage and found Vamsi in deep sleep in the bedroom. They then take a certain liquid out from a pouch and pour it in a vessel close to the bedside. What could it possibly be?

Vasundhara is also seen taking care of Vamsi, sitting by his side. She prays to god to show her a path for his recovery, since there are no humans and cellphones networks are unavailable for help. Vamsi remains unconscious ever since he fought with Vasundhara and slept on the roof, in cold weather. Due to unexplained reasons, neither Nakshatra nor Ayirendri saw Vasundhara. But if they decide to lurk around the cottage, who will save Vasundhara?

To know more, stay tuned to this space. For more entertainment, watch the latest episodes of Akka Chellellu on ZEE5.

Are You Sleep Deprived Too? Watch The ZEE5 Original Padukoniyyandira Baboe, Streaming Now