Maate Mantramu 12 June 2019 Preview: Will Vasundhara Save Herself Or Vamsi?

Vamsi is unwell. And Nakshatra and Ayirendri have hatched yet another evil plan. What will Pallavi Ramisetty's character do now? 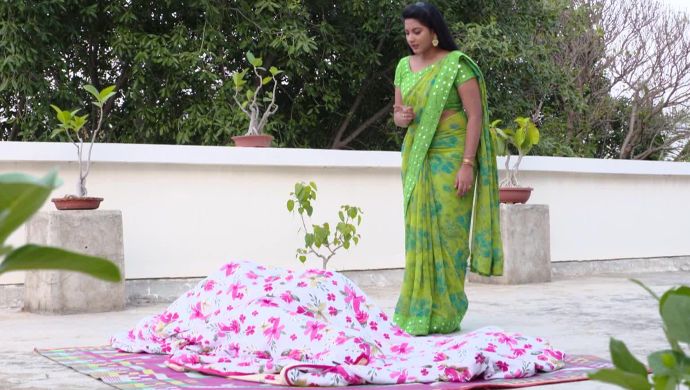 More troubles are making their way into Vasundhara’s life to turn it into a living hell, in the Telugu TV show Maate Mantramu. In the episode telecast on June 10, 2019, we saw that Vamsi fought with Vasundhara (played by Ali Reza and Pallavi Ramisetty, respectively) in the cottage again for a silly reason. He ended up sleeping alone on the roof and Vasundhara had to quietly sleep in the shared room. Now, Vasundhara doesn’t know it yet, but her life, that was just beginning to feel better, will turn dark once again. Check out what happens next:

In the latest episode, airing on June 12, 2019, we see that Chitrasen is focused on completing the sketch of Vamsi’s ‘heart friend’. Anand and Alekhya are finding it difficult, but are completing their vratam. But Nakshatra and Ayirendri (played by Tulasi Yerra and Ramya Raghav) aren’t simply minding their own business. Their dirty plans and plots are back on track. And in the cottage, Vamsi has caught a cold after sleeping in the open space. The next morning when Vasundhara finds him there, she picks him up and takes him to the room.

Without Chitti, the AI, and people around her, Vasundhara is helpless and worried about Vamsi’s well-being. Yet, she does all that she possibly can. Little does she know that while she tries to save Vamsi’s life, her own life is soon to be in danger.

While all their plans flop in the worst ways possible, they never seem to give up.  The evil mother-daughter duo visit a snake charmer this time. They tell him that the work should be done at the earliest and that Vasundhara should be dead. The snake charmer asserts confirms that his snake will not return before completing the task assigned, so they need not worry. He then shows a picture of Vasundhara to his snake as he plays the pungi. Then he exclaims that now his snake will take revenge on Vasundhara and it’ll make sure she is dead before sundown.

Does Vasundhara manage to save both lives? Or will she have to give up on one for the other? That’s something we have to wait and watch. In the meantime, check out the latest episodes of Kalyana Vaibhogam on ZEE5.

What Will Manga Do Now To Bring Nithya's Reality Out?