When she gets a chance to keep Vasundhara away from her beloved grandson, Vamsi, she tries to seize it by all means. Read to know how. 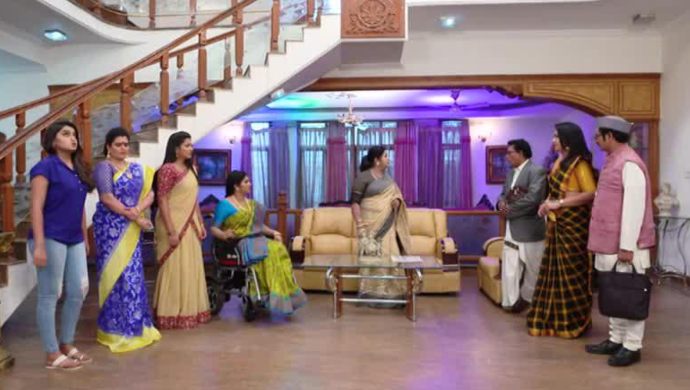 Opposing Vamsi Krishna Kakarla’s (played by Ali Reza) decision, in the Telugu TV show Maate Mantramu, is something that no one will dare to do. Recently, he announced that Vasundhara (played by Pallavi Ramisetty) will stay wherever he stays. So, people who hate Vasundhara tried to take every opportunity to keep Vasundhara away. And evidently, there are many of them inside the Kakarla house itself who want her to be gone. With Vamsi and Nakshatra’s (played by Tulasi Yerra) wedding approaching in a couple of days, what schemes will the haters Nakshatra-Ayirendri (played by Ramya Raghav) and Kantamma plan to keep Vasundhara away?

Watch a snippet from the upcoming episode here:

In case you had missed it, in the last episode, we saw that Nakshatra was asked to pick a few designs of jewellery for her wedding day. She chose two but in all, she had taken five boxes of gold jewellery. Later, Kantamma took a few of the jewellery boxes and hid them in the Kakarla outhouse. Vasundhara found them and asked her grandmother about them. Slyly, Kantamma told her that she needed to do that to keep something for Anand and Alekhya‘s wedding. Vasundhara told her grandmother how cheap it would be to do that, but it all went in vain. Finally, Kantamma told her to keep it as a secret. But when everyone found out about the missing boxes, Kantamma forced Vasundhara to take the blame on herself and the poor Vasundhara did as she was told.

For more, check out Kalyana Vaibhogam on ZEE5.

Allu Sirish, Rukshar Dhillon And Master Bharath Will Light Up Your Mood In ABCD, Watch It Exclusively On ZEE5