This week in Local Gangs, the senior-junior gang leader, Ravi and Tejaswi come in a revenge mode, inspired by Chiranjeevi's Indra. Watch the promo 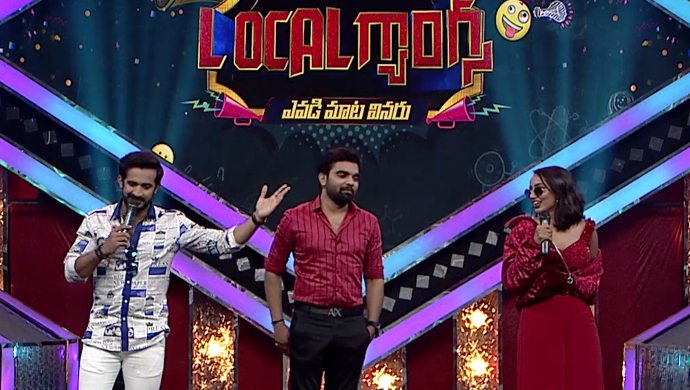 Previously on Local Gangs, the stage was graced by Vishwak Sen of Falaknuma Das and Ruhani Sharma. The young actors were recently seen starring in Sailesh Konalu directorial thriller, HIT. The actors joined senior-junior gang leader of the show, Ravi and Tejaswi Madivada, in the quest to win the game. Ruhani’s priceless expression upon knowing Shekar Master and Vishwak’s confession of love for Ileana were truly the highlights.

Watch the promo for the next episode of Local Gangs here:

This week in the show, Master Shekar and HOD Anasuya Bharadwaj tone down the heat with their cool performance. The duo dances to Armaan Malik’s Nennilla from Varun Tej and Raashi Khanna’s Tholi Prema. The two also adopt retro fashion with Shekar Master opting for sweatshirt under a jacket and Anasuya rocking a polka-dotted saree with bell sleeves.

Once again, Ravi leaves his classy act backstage and brings a more massy self on the stage. This time, he is no Bhai from the gully, but is ‘the Ravi Sena Reddy’. That name sounds similar to something. Doesn’t it? Yes, he takes inspiration from Megastar Chiranjeevi’s character named Indrasena Reddy from the cult-classic film, Indra.

Joining Ravi’s bandwagon, Tejaswi turns into someone closely relatable to Indra’s Snehalata, played by Aarti Agarwal. The cool junior leader also brings her most stylish avatar to the stage, dressed in a red evening gown. She styles it with a red bomber jacket, used as an off-shoulder coat and oval glasses. And of course, Pradeep does not leave any opportunity to fool them unused.

Watch the full episode on March 7, 2020, on ZEE5, before TV and stay tuned for all the important updates. You can also check out everything about Adhirnidi right here.

Adhirindi Episode 12: Venu Steals The Show With One Statement, "Please Question My Answer"