Let The Excitement Roar Because Vamsi And Vasundhara Are Now Hitched

Was it by choice or was it just an accident? Keep watching Maate Mantramu to find out. 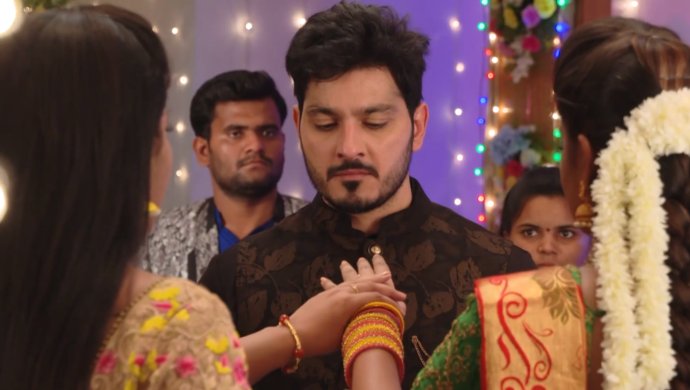 Good news alert for all the Vamsi and Vasundhara fans, as also spoiler alert! In Maate Mantramu, the one thing that has kept all the Ali Reza and Pallavi Ramisetty fans stuck to the screens has come true. Yes! Vamsi and Vasundhara are finally and officially a couple now. Who made the move? Who said yes? Let’s spill the beans.

Vamsi was tired with all the waiting, drinking and heartbreak that he suffered from because of his ‘heart friend’. Just to keep his family happy and to stop them from nagging, Vamsi agreed to marry his mardal Nakshatra, played by Tulasi Yerra. All this while, Vasundhara has been secretly in love with Vamsi. She promised him that she will stay by his side at all times and situations. You might want to thank her for making that promise because that’s what helped Vamsi and Vasundhara become one.

The forever-excited Nakshatra wanted to teach Vasundhara a lesson. She called Vasundhara to stand next to her, holding her hand when Vamsi puts the ring on her finger. As the disinterested Vamsi is about to do it, Nakshatra burns her one of her fingers in the flame of the aarti and withdraws her other hand from Vasundhara’s grip, giving room for Vasundhara’s hand to slip in Vamsi’s. And Voila!

When the realisation finally hit everyone, their expressions were a sight to behold. Ayirendri and her mother, who is the grandmother of Nakshatra and Vamsi, lose their calm at this sight while Anand and his mother rejoice. Vamsi’s grandmother tries to nullify the engagement by stating that Vamsi does not have any feelings for Vasundhara and just a ring cannot decide anything. But let’s be honest! We all know that this is how Vamsi will start to accept that his true love is, in fact, Vasundhara.

Until they decide to accept their feelings in front of the family, you can enjoy Madhu and Mrudula fight for their love in Ninne Pelladatha on ZEE5.

Can Manga Defeat The Generational Curse Of The Suryadevara Family?