On Kamal Haasan's 65th birthday, we take a look at the wide spectrum of contributions he has made to the film industries. Yet no words can justify 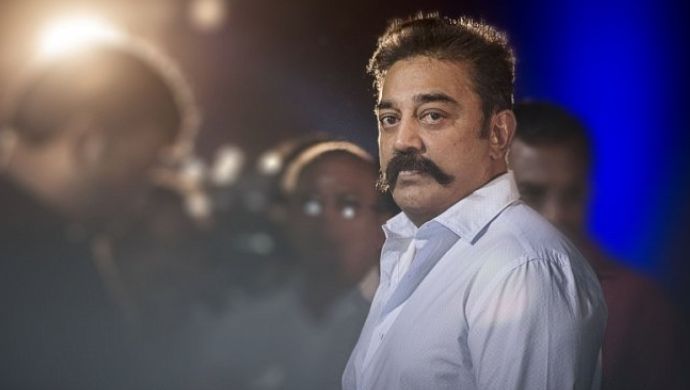 Where do you begin tracing a journey that is not restricted to a single sector? Legendary actor, successful director, wise producer, exceptional writer, graceful dancer, professional make-up artist, a politician, a philanthropist, an idol and more. To put simply, birthday boy Kamal Haasan is an institution in himself. If he had really had to add a feature each time he delved into something new, the actor would run out of space but wouldn’t stop. That’s Kamal Haasan, for you, in a nutshell – the Ulaga Nayagan.

Kamal Hassan became an actor at the young age of 4, with the film Kalathur Kannamma and also won the President’s Gold Medal. Thereon, there was no turning back. At the age of 65, Kamal Haasan enters his 59th year in the cinema business. Over his career spanning almost six decades, he has worked with noted filmmakers, technicians and actors. From working for 16 films in one year to delivering unlimited hits after hits, Haasan worked his way to become the legend that he is, to become the Ulaga Nayagan (Hero of the World).

While the stories about his on-screen personas are unending, let’s take a look at his career trajectory through a macroscopic lens.

Acting: Having started with a Malayalam film, this legendary actor has worked his way through 200+ films. Most of his work is in Tamil but he ventured into the Hindi Film Industry, Telugu Films, Kannada Films and left an unmissable impression in all of them. Any and everyone will vouch for his acting prowess and quote him to be a legend of acting. His work as an actor is exceptionally daring, too. Films like Swathy Muthyam, Sadma, Indian, Dashavatharam, Pushpak are the testimony to it.

Storytelling: Kamal Haasan realised that his heart belonged to direction, although his expertise lies in acting. So, after becoming a viable actor, he ventured into storytelling. There are many films which have been directed, written and produced by him. He started his own production house, Haasan Brothers, which was later renamed to Raaj Kamal Films. In some of his films, he has acted too. Few of the greatest examples of his one-man army work remain Hey Ram, Thevar Magan and Chachi 420.

Musician: You may have seen pictures of the actor in recording studios. Do not mistake it for his dubbing sessions. Because he can catch a tune and sing the song. This versatile artist has used music quite a few times to extend his craft of storytelling. Apart from singing, he has also written the lyrics for many popular songs. However, it’s the Tamizha who can revel and rejoice in his musical glory. Unless songs mean more to you than just the language. Ninaivo Oru Paravai, Inju Iduppazhagi, Sundari Neeyum are a few to name.

Collectively for his work, Kamal Haasan bagged 4 National Awards and 19 Filmfare Awards along with President’s Gold Medal, Padma Bhushan and Padma Shri honour amongst other awards.

Other Artistic Work: Other than acting, writing, directing, producing, singing and songwriting, Kamal Haasan has indulged in more things on a film set. At the peak of his career, the actor took a sabbatical to complete a professional workshop in make-up in the US for under Michael Westmore. After his initial films, the actor took a 7-year break before coming back as a dance assistant. He worked under choreographer Thankappan, in films like Maanavan, Annai Velankani, Kasi Yathirai and also appeared on-screen.

Welfare Associations: Kamal Haasan is the first celebrity to convert his massive fandoms into welfare associations. Earlier, the actor expressed his views on not wanting to have a ‘grand’ celebration. He suggested them to yield their time in helping the needy. This year, as per the press release from the association, they will be involved in social activities like donating food and medicines to needy kids, women and the elderly. There will be blood and organ donation camps along with distribution of dressing, sewing machines and educational expenses will be taken care of.

Personal Life: Once again, unlike most of his contemporaries, Kamal Haasan did not draw curtains on the media coverage about his life outside the film sets. He had numerous relationships and he did not try to deny them. The actor separated from his first wife, Vani  – who he married after working together in a film – while he had started seeing Sarika. Despite the conservative society, the actor and Sarika continued their live-in relationship.

They also had a baby out of the wedlock, who is a celebrated actress herself now – Shruti Haasan. Having been married to Sarika for over a decade, with two daughters, the couple sought divorce. Soon, his name started to be linked up with his co-stars until his relationship with Gauthami came out in the open. 13 years later, she took to her blog to confirm the news about their break-up. However, neither the actor, not the people related to him ever express bitterness to their past.

Politics & Stands: Earlier in 2018, the actor entered politics with his party Makkal Needhi Maiam (People’s Justice Centre). The artist is widely vocal about his beliefs and does not fear the backlash. He is touted to be left-leaning ideologist. However, because of his stances, he has been criticized by many. Apparently, the actor is said to believe that his political career would not be long and fruitful, yet he chose to dive in.

The actor is supposedly prepping for the sequel of his popular film which is slated to release in 2020, Indian 2. We’re eagerly waiting to see his magic being created on the screen once again and for many more years to come. Wishing him the happiest birthday, we sign out. Don’t forget to watch Gods Of Dharmapuri on ZEE5.

Birthday Special: Get To Know The Powerhouse Entertainer Anushka Shetty A Little Better