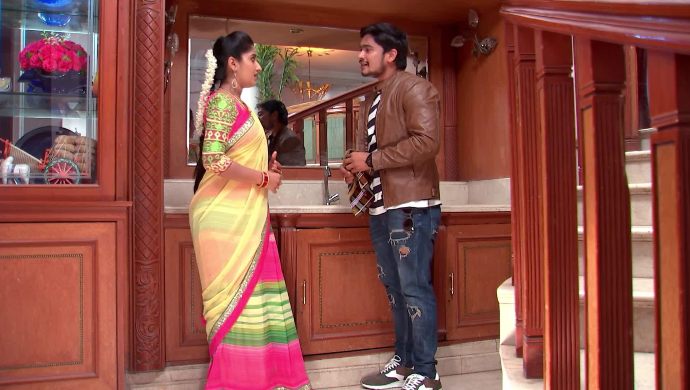 Previously in the Telugu TV show, Kalyana Vaibhogam, Manga (played by Meghana Lokesh) decides to give away everything to her twin sister Nithya. From property papers to bank cards and car keys, Manga returns everything and even finds a suitable match for her sister. Nithya, along with Chandrika and Prasad, tries to make the boy (Vijay) go away. But he is adamant on meeting Nithya and proceeding with the arranged marriage. They all prepare for the day of ‘Pelli Choopulu‘ and here’s what happened next.

As the Pelli Choopulu goes on upstairs, Jai (played by VJ Sunny) makes an entry with Chary to Swaroopa’s (played by Bhavana Samanthula) house. He asks what was happening and Swaroopa tells them it’s Manga’s ‘Gandham function’. Jai asks everyone why he wasn’t informed and why Manga had to lie about it.

Swaroopa tells him to drop it and complete the function. He applies some turmeric paste on Nithya’s face, since she was pretending to be Manga for the moment, and asks if they can leave.

Nithya prepares to walk away with Jai, but Swaroopa asks her to wash her face and change into her regular saree before leaving. Nithya goes upstairs and Manga comes down to leave with Jai.

During their car ride home, Vijay calls Jai and apologises for missing his calls. Jai asks for the address of his guest house and Manga tells him that they must go and visit him.

Later, Manga finds out that Jai’s friend and Nithya’s would-be husband are the same. She uses her pregnancy situation and escapes before Jai could meet Vijay.

At night, Manga asks Jai to apply the Gandham again. When Jai asks why she wants it for the second time, Manga weaves a story that the Gandham function was for Swaroopa’s daughter. But now she wants it as Jai’s wife.

The next morning, Vijay comes home as promised. But Nithya drops him near Jai’s bungalow and leaves the place instantly to avoid any problems. Jai takes his friend inside the house and they wait for Manga to come out.

Manga keeps panicking inside her room. After delaying for some time, Manga leaves it upon her gods and walks out to meet Jai’s friend with him.

Surprisingly, Vijay senses the fear in Manga and acts as if they are meeting for the first time. Later, Manga and Vijay stand apart from the crowd and talk. Manga thanks him playing along, and Vijay tells her that he has confidence that she wouldn’t be doing any wrong.

What happens when Jai sees them talking to each other in a corner? Watch it here. For more entertainment, check out Maate Mantramu on ZEE5.

Maate Mantramu: Murali Forces Vasundhara To Believe That He Is Vamsi Himself!