During the week, Nithya dresses up as Manga and spends a day in the Suryadevara house and with Jai. Read the full update here. 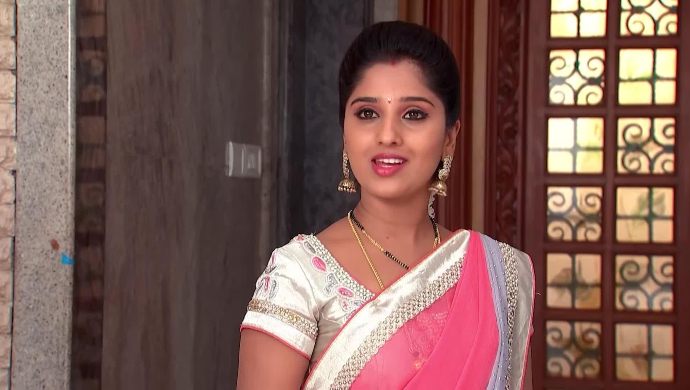 In the Telugu TV show Kalyana Vaibhogam, Manga (played by Meghana Lokesh) manages to successfully complete the adoption process despite Nithya’s attempts to derail it. Chandrika and Prasad fall for Manga’s tricks and get nothing in return. Hence, they join hands with Nithya again. Swaroopa is happily watching her elder daughter Manga play games with and for Nithya. Jai still remains oblivious to Nithya’s death and Chary has joined hands with Manga to bring out her truth. Here’s what happened in the last week.

It starts with Jai returning home from work, after a big fight with Manga at home and in the office too. He buys a bunch of flowers for his wife on the way because Chary and the flower-lady trick him into buying them.

Chandrika and Prasad wait for Jai to return home so that they could help resolve Jai and Manga’s fight, for Nithya’s benefit. Manga asks them about staying up so late and they try to sugarcoat their answers.

Soon after Manga leaves with Tulasi, Nithya is received by Chandrika and Prasad at the Suryadevara house. Kalpana second-guesses if it is Manga or Nithya but soon brushes away the thought.

Once inside, Nithya dressed as Manga dashes into Jai and falls into his arms. Chary walks in and disturbs their ‘moment’. Nithya refers to Jai as Jai instead of em andi or srivaru. Jai catches on this and asks her about the changed behaviour. Nithya asks Jai to stay at home.

Nithya takes Jai into their room and asks him to spend some quality time with her. That’s when a phone call disturbs them. Swaroopa comes to the Suryadevara house and Chandrika and Prasad try to get her out of the house.

In the temple, Manga does all the work that her mother asks her to do. She asks if they can go home but Tulasi becomes furious again. She tries to taunt Manga but Manga handles the situation. But Manga wonders the reason behind her mother’s changed behaviour.

Nithya, along with Chandrika and Prasad, tries to get her hands on the Power of Attorney papers. However, their collective efforts go in vain. Swaroopa comes upstairs to meet Manga while the three are in the same room.

Later, after making many blunders on the dinning table, Nithya’s true self comes out in front of Swaroopa. Swaroopa is about to slap Nithya when she talks about killing Swaroopa and Manga. Jai sees this and starts scolding Swaroopa and asks her to stay in her limits.

Maate Mantramu: 6 Scenes That Made Our Hearts Skip A Beat In The 15 July 2019 Episode