Manga has won hearts by winning the recent Miss Hyderabad fashion show. Everyone is celebrating her success but she has other plans. 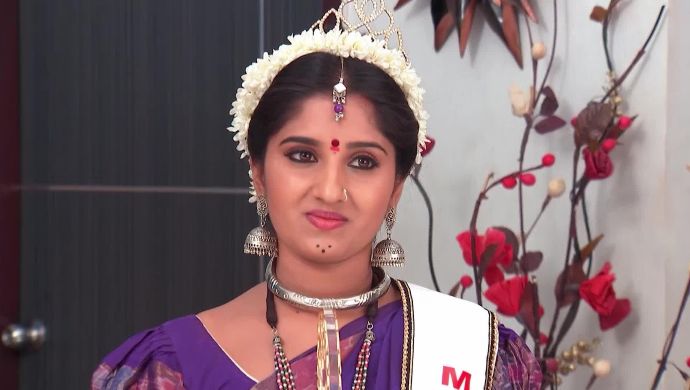 Manga’s (played by Meghana Lokesh) decision of participating in the fashion show was something that most believed would be a failure. In the Telugu TV show Kalyana Vaibhogam, Manga proved that she can do whatever she wants. And finally, despite all the difficulties, pessimism and the attempts to stop her, Manga won. She came out a winner in more ways than one ways and proved nothing is impossible for her. A lot has happened since the fashion show ended. If you need to catch up, read the following details, as we break down everything for you. Or you can watch the week in short here:

Manga returns home and is greeted by the entire family. Her mother-in-law stops them at the door for ‘drishti‘ removal. Jai (played by VJ Sunny) tries to take the credit for her win but everyone makes fun of him.

While everyone is busy praising Manga and her unbelievable achievements, Chandrika says there’s no point in appreciating someone who may die in the next four days. But Prasad covers up for her.

Jai yells at them for being so pessimistic and asks Manga if she isn’t happy. Manga tells him that he shouldn’t have revealed her true identity in front of everyone else.

Manga and Jai end up fighting for silly reasons and decide to sleep separately. Both end up in Jeji’s room. When the grandmother asks them if they had a fight, they deny.

The next day, Chandrika and Prasad meet Nithya. They provoke her to take revenge against Manga. Nithya says that this time a truck will kill her and no one can stop this from happening.

Manga and Chary keep thinking about the reasons why Nithya kept her cover intact even when Jai announced her death. She tells Chary about her plans to be adopted as the legal heir to Swaroopa Srinivas.

Nithya also learns about Manga’s plans and this makes her even more furious. She meets Tulasi and warns her to save her daughter from the trouble she’s inviting upon herself.

At home, Manga and Chary plan to bring Chandrika and Prasad on their side. So she tells the couple that she wants to give away half of Swaroopa’s wealth to them since she considers them as family.

The seed of Manga’s masterplan has been sowed. What will she do next? Watch this space for more updates. In the meantime, check out the latest episodes of Ninne Pelladatha on ZEE5.

We Love How Our Favourite Celebs Wished Their Nannas