From planning to lose to trying to win, Meghana Lokesh's character has gone through a full circle. Here's what happened in the last week. 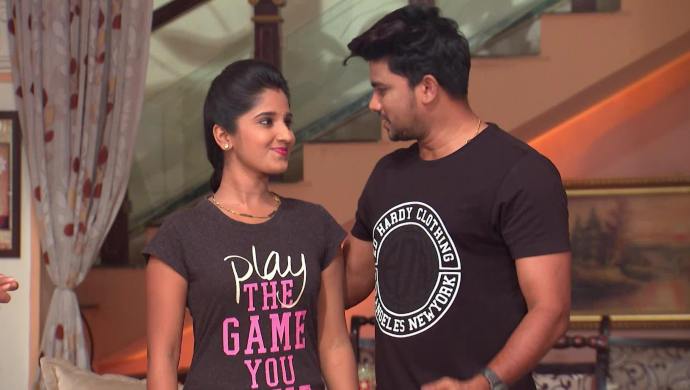 In the Telugu serial Kalyana Vaibhogam, we have so far seen that Manga has finally decided to fight back and bring Nithya’s reality out in the open. To add salt to her wound, she further vowed to kill all of Nithya’s dreams and hopes by losing the fashion show Nithya had been winning for a while. But guess what? Now she actually plans to win the title posing as Nithya. Too many things you can’t keep up with? We bring to you a breakdown of all that happened in the last week in this Telugu TV show starring VJ Sunny and Meghana Lokesh, starting May 27, 2019. You can watch the week in short here:

The week begins with a bunch of media honchos discussing the fashion show. They want to cast the winner as their brand ambassador but it shouldn’t be Nithya. Kangan, a trainer, introduces them to Naina.

Chandrika and Prasad join them and confidently tell them that Nithya will not win the title this time. They congratulate Naina for her sure-shot victory, in advance, and ask Kangan to meet them at Nithya’s place.

Kangan meets Manga, who is disguised as Nithya for the show. He asks her to do the catwalk. Seeing Manga’s attitude, Kangan doubts whether it really is the two-time winner Nithya.

Unable to handle Nithya’s new reality, Kangan quits his idea of training her this year. Manga tells Chary and Jai that the fashion show is way out of her league and she can’t win it. But both men remain optimistic.

With Jai’s encouragement, Manga tries the catwalk once again. But this time, she trips and falls on the sofa, taking Jai along with her. Nithya sees them from upstairs and is disgusted and furious.

Nithya tells Swaroopa that Manga will ruin her reputation if she continues to participate in the show. She forces Swaroopa to ensure that Manga no longer participates. But Nithya’s anger makes her want to slap Manga.

Swaroopa does what her daughter wants. But Jai stops Swaroopa and tells Manga that no matter what, now she has to win the show. He learns that his corporate competitors are trying dirty tricks to win the business.

In order to celebrate Nithya’s loss and Manga’s inability to do anything, Chandrika and Prasad sit with the competitors and raise a toast to their achievement. They assure them again that Nithya will not win.

In just one night, Manga perfects her catwalk and impresses Jai, Chary and Swaroopa, who gives Nithya hope by saying that Manga has never failed to achieve what she wants.

They all visit a fashion designer, Priya, to get an outfit for the show. But Priya also supports the competitors. Her assistant Ram hates to see this and helps Manga out by offering to design a dress along with his wife, Gundamma.

At home, Nithya is happy thinking that the title of Miss Hyderabad will be hers once again, thanks to Manga. Chandrika and Prasad come in to kill her happiness. They tell her that Manga might make a mistake again. Or even worse, she might claim the victory in her name by announcing Nithya’s death.

This puts Nithya in a fix once again. Will Manga succeed? Or will Nithya let Manga succeed? What are you placing your bets on? Watch the next episode to find out. Until then, check out Muddha Mandaram on ZEE5.