Last week, Manga met Chary and told her about her plans to bring back her baby in the eyes of Suryadevara family. Read the full weekly update here 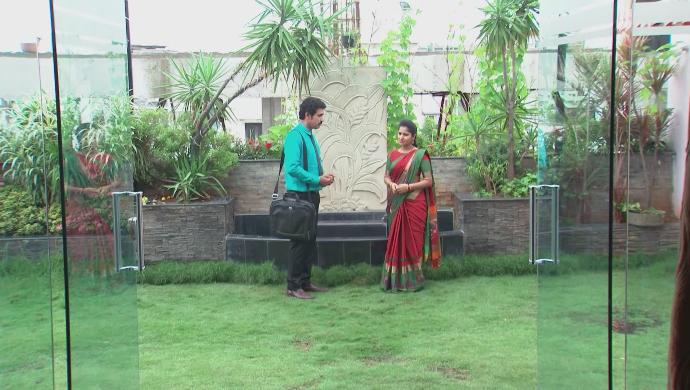 Previously, in the Telugu TV show Kalyana Vaibhogam, Swaroopa finds out what Nithya truly wants when the plumber gets the wiring messed up in Manga’s bathroom. She decides to solve the problem and gets Nithya back home by dropping Manga in Jai’s office. Once back home, Swaroopa tries to understand what Nithya’s real plan was. Nithya hesitates to confess anything and is also scared if her mother has learned the truth already.

Chandrika and Prasad are annoyed looking at all the love and affection. Prasad decides to do something about it and goes to speak to the eldest lady in the room. He tells her something that shocks the woman.

Manga goes to give the gift to the expectant mother. But is stopped by the elderly woman who tells her to mind herself and walk out of the function.

Later during the day, Nithya calls Chandrika and asks if Jeji is reading her book, Kalpana is in the kitchen and Manga is peaking from the staircase. Chandrika asks how did she get everything so correct and Nithya tells that it’s because she planted the seed.

Manga goes out and calls Swaroopa. The latter asks if everything is alright and the former tells that she has been vomiting and feeling weird twirls in her stomach. Swaroopa tells her to not worry.

Swaroopa and Nithya take Manga to the hospital for Manga’s regular check-up. Nithya tells Manga that she wants to see her happy and does not mind spending a few more days next to Jai like her.

Later, Chary comes to the Suryadevara house to find Manga crying alone in the lawn. He affirms that the truth will be out soon and they will all be celebrating her sooner than later.

When Manga fails to understand how she could change the situation, Chary helps her with some food for thought and they sketch out their plan together.

Nithya asks Swaroopa what Manga was up to and Swaroopa tells her that she should have known better. Once Manga starts playing, the game begins. Manga wonders how her game is related to Prasad falling sick.

Everyone in the house takes Prasad to the hospital on a stretcher and Chary goes overboard with his acting and cries to save Prasad. Manga follows, unknowingly and out of panic, Chandrika too starts crying for her husband.