Manga goes to see Nithya in the Suryadevara house. But Kalpana sees her walking out. Read the full recap here 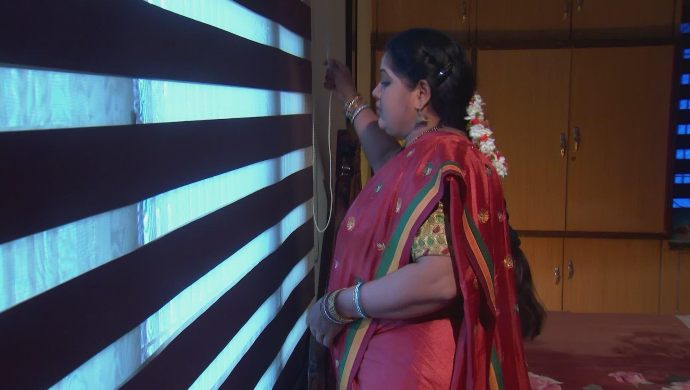 Previously, in the Telugu TV show Kalyana Vaibhogam, Jai is saddened to know what happened to another pregnant lady in the hospital. And he is annoyed to hear the way the cops were talking about her. Nithya tells the doctor to play along with her story if she wants to live. The doctor tells Jai that his wife and their unborn baby are both healthy. Swaroopa gets a call from the police station and they inform that her daughter is admitted in the same hospital. When she goes to see Nithya, the doctor tells Swaroopa that she is pregnant. That’s how she finds about Nithya’s evil plan and Manga’s helplessness. Next, Nithya pretends to fall from the stairs and uses the same doctor to tell everyone that she has had a miscarriage.

Swaroopa brings Manga home and the next morning when she wakes up, Manga asks for Jai and Nithya. Swaroopa tells her to take rest since she hasn’t recovered entirely.

Manga insists to know what happened to her. Swaroopa loses her calm and tells her exactly what Nithya did to her. But Manga is not willing to believe. Instead, she asks her mother to watch her words and the way she speaks of her daughter.

On the other hand, Nithya has found her place in the Suryadevara house and get decked up in the morning. She is busy praising herself, in the third person, when Jai wakes up and sees what she was doing.

She tries to cover up by telling that she is acting normal to ensure that he does not become a drunkard, like the night before. Jai apologises to her for his behaviour.

Chary barges into their room and asks Jai to get ready for office. He tells his boss that it’s high time that he returns to office, only to keep him away from the sorcerous Nithya.

Later that night, Manga comes home to see Nithya and ask her what was happening. She meets Chary on the way and he tells her the same thing as Swaroopa. Chary asks Manga to be careful because Nithya does not want to leave her newfound place.

Manga argues that Nithya might have a strong reason to do what she did. That’s when Nithya’s henchmen, Chandrika and Prasad walk up to Manga and tell her that Nithya has been struggling and is in pain because Manga wasn’t around.

Kalpana prepares to call it a day and head to bed. While closing the blinds of her window, she seems someone on the way out of their house. The girl looks like Manga, she thinks and goes out to see.

Manga hides behind Jai’s car and Chandrika and Prasad come to cover up the story. They tell that she must have been hallucinating because no one has been outside other than the two of them.