That Nithya's death is fake is not entirely hidden anymore. Here is what Jai and Manga have been up to in the last week. 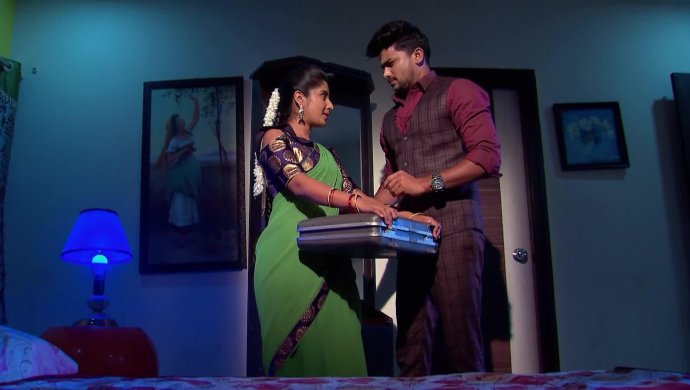 In the Telugu TV show Kalyana Vaibhogam, the days of Nithya (played by Meghana Lokesh) succeeding at everything are long gone. If we thought she was the only mastermind, her twin sister Manga has turned out to be equally brilliant at planning. Now, Manga has been successfully catching up with all of Nithya’s misdeeds. What will she do to uncover the evil side of Nithya in front of the Suryadevara family? And after succeeding at that, will the generational curse be cured? The answers might take time. Before that, take a look at everything that happened over the week in the Telugu serial, starting May 20, 2019, here:

The week started with Tulasi informing Swaroopa about the incident where Manga dressed up as Nithya and tried to find out the truth from Tulasi. Swaroopa asks her to be cautious, Nithya steps in and makes fun of the two.

This makes everyone curious about what the deal was. Arrogantly, Chandrika says that Jai has something romantic planned for his wife and the fruits and flowers are for that. Manga gathers the things that had fallen out and tells everyone to not poke fun at her husband.

After going into the room, Manga tells Jai to never do things like that and asks him to be cautious of his surroundings. Jai tells Manga that there is no reason to be fearful now that they’re in love and married.

The next morning, Chary tells Manga that Nithya is indeed alive. Together, they work out a plan to reveal Nithya’s reality to everyone. Their first step is to move into Swaroopa’s house and then participate in Nithya’s favourite fashion show.

Swaroopa is helpless and so she allows Manga, Jai and Chary to stay at their house for the next three days. Following them, Chandrika and Prasad walk in to stay, too. This makes Nithya furious to a point where she starts accusing her mother of being useless.

The same night, Nithya finds herself stuck in her own house while her arch enemy and twin sister Manga sits and relaxes with her mother and the love her life, Jai.

To know what Manga’s next move is, stay tuned to this space. Until then, check out Maate Mantramu on ZEE5.

Take A Look At Everything That Happened At Zee Mahotsavam 2019