Last week, Manga went to meet Jai in the office after staying away from him after a long time. Read on to know more 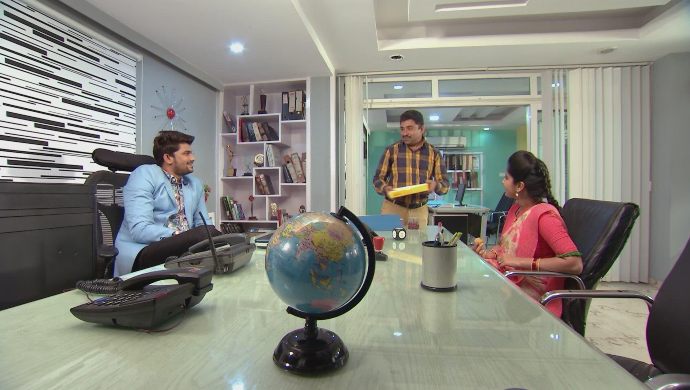 Previously, in the Telugu TV show Kalyana Vaibhogam, Swaroopa tells Manga that Nithya is trying to settle down as Jai’s wife after killing Manga’s baby in the eyes of the world. Manga does not believe her mother and decides to find out the truth by herself. Nithya tries to get closer to Jai but Chary comes inside their room and asks Jai to leave for office right away with him. Later at night, Manga comes to the Suryadevara house and Chary tells her about how evil Nithya is. Nithya, who had seen Manga coming in, acts innocent while Manga peeps into the bedroom.

Jai tells Nithya, who is acting like Manga, that she (Manga) turned him into an empathetic human being from a materialistic man. Now he needs time to recover and will be alright after some days.

Jai tells his wife that she, too, needs to have her piece of mind. Nithya tells Jai that she will stay inside her room and asks Jai to tell everyone in the house and Swaroopa to let her be.

Jai calls out everyone and tells them that he is heading to the office and they need to take extra care of his wife in such critical condition. He asks them to keep her inside the house and ask Swaroopa to stay away from Manga for some days.

Jeji and Jai’s mother tell him that they will take good care of Manga and he can go to work and focus there. Chary says that she needs to go out. When asked why, he tries to cover up by saying that she will be bored inside the house.

The next day, Nithya sends a killer to Swaroopa’s house as a plumber. Swaroopa and Manga discuss who has sent the plumber. When Swaroopa thinks about it, she connects the dots.

She asks Manga to come out and goes to the bathroom to see what was wrong. She scans the bathroom and sees sparks in the geyser’s wire. She turns off the switch and fixes the wires while cursing Nithya.

Swaroopa calls Nithya to asks to come home but she does not pick, neither do Chandrika and Prasad. Finally, Swaroopa calls Jeji, who tells her to stay away from Manga for some days.

Nithya takes the phone and talks to Swaroopa. She expresses how deeply she is affected that Manga is away from her family. Swaroopa promises that she will fix Manga’s condition soon and Nithya will not have to worry about it.

Nithya starts wondering what her mother was up to. She leaves with Chandrika and Swaroopa takes Manga out of the house. Swaroopa drops Manga in Jai’s office and Nithya wonders how she didn’t see this coming.

Jai is surprised and happy to see Manga in the office. But when an employee distributes sweets for having a baby, Manga gets excited about her own child. Jai is sad to see this and reminds her that they lost their child.

Manga does not know how to react and she leaves Jai’s office hurriedly. Chary scolds Jai for being so harsh and reminds him that right now Manga is also like a baby to him.

Ninne Pelladatha Weekly Update: Madhu Asks Mrudula To Go Away From Him And Everyone Else