Last week in Kalyana Vaibhogam, Jai and Manga win the competition, after all their hardships and troubles. Read the weekly update here 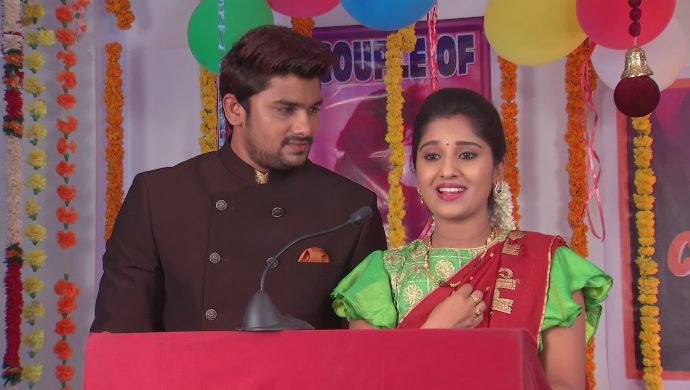 In the week before the last in Kalyana Vaibhogam, Manga finds a way to convince Jai to participate in the Best Couples Competition. The day before they leave for the competition, Swaroopa sends cops to caution Jai about keeping Manga and himself safe during the competition. That night, Jai hands over a gun to Manga when she packs their bags for the competition. Manga worries about his intentions, but does not let fear take over her. Nithya dresses up as a helper and decides to stay close to Jai and Manga.

On the last night of the competition, Chary gives Jai and Manga a task which requires Manga to make some signals, and Jai has to guess them. While they expect it to be an easy task, Jai and Manga lose this round.

Sometime later, Manga goes and apologises to Jai, who was upset because they lost the task. Chary tries to stop her, to avoid any further complication in their marriage. Chandrika, too, tries to stop her, because Nithya was in the room with Jai.

The organisers are impressed by Manga and Jai’s relationship and decide to make them the winners. When Jai and Manga go to collect their trophy, Manga takes pride in having a husband like Jai, while he gives the entire credit to Manga.

After coming home with the new trophy, Jai goes directly into his room and thinks about all that happened. He realises that the girl with him, the other night, was not Manga but she was Nithya.

Later that night, Jai brings a new bottle of alcohol and asks his uncle to join him. Powder Prasad happily joins Jai, but Manga and Chary start worrying, because Jai plans to get some details about Nithya after getting Prasad intoxicated.

No 1 Kodalu Weekly Update From 6 To 11 January 2020: Rahul Meets His Grandfather